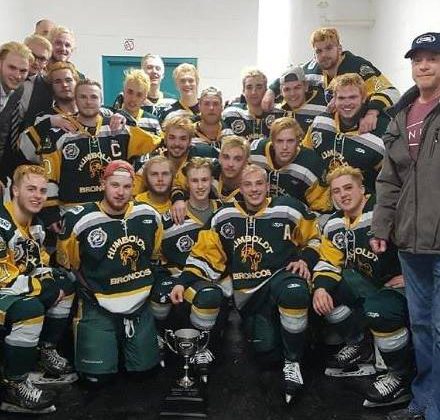 UPDATE: The death toll from the crash has increased to 15. RCMP have also updated the number of people on the bus to 29, with 14 initially declared dead and 15 taken to hospital.

UPDATE: Nipawin RCMP have confirmed that 14 of the 28 people on the bus have died. The other 14 have been taken to hospital, three with critical injuries.

Police are not confirming any identities, or whether the deceased are players, coaches, or the driver. Families are being notified and an update is expected Saturday morning.

A coach from Peace River is reported to be among those killed in a bus crash in northern Saskatchewan. A team bus carrying the Humboldt Broncos junior hockey team crashed into a semi truck north of Tisdale, and Nipawin RCMP have confirmed multiple fatalities.

The first fatality identified by their family is Broncos head coach Darcy Haugan. Haugan is a Peace River native, and his sister confirmed his death on Twitter.

My brother didn’t make it…

Before moving to Humboldt in 2015, Haugan was the GM and head coach of the Peace River Navigators since 2003. According to the Broncos’ website, he and his wife Christina have two sons.

The Navigators and everyone involved with the team is sending out thoughts and prayers for the Humboldt Broncos Team,…

The hockey team was on its way to Nipawin for game five of their Saskatchewan Junior Hockey League semifinal series. Police have not yet commented on the cause of the crash or confirmed the number of injuries or fatalities.

Tonight’s game is Cancelled. The accident being talked about involved Humboldt team bus. We ask during this time that you don’t send messages. When more information is given we will update.

Cale Cripps from Grande Prairie is on the Broncos regular season roster as the 18 year old played four games with the team in January. He is not listed on their playoff roster.