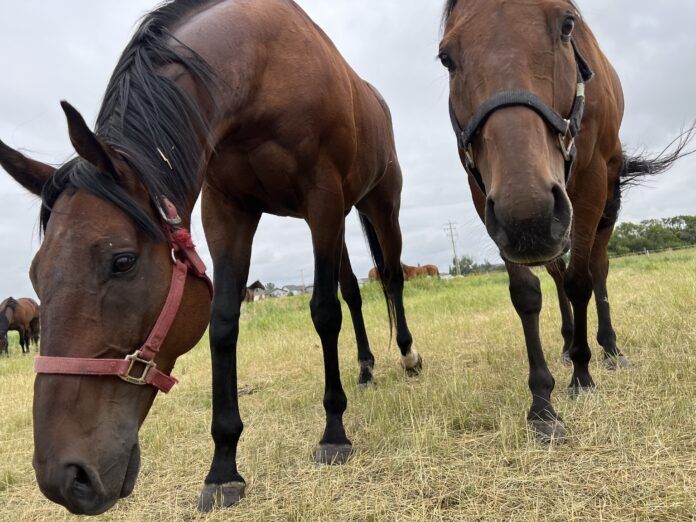 The County of Grande Prairies Livestock Emergency Response Plan has taken preparedness up one step with the creation of a livestock database.  Agricultural Fieldman for the county Sonja Raven says to build the database Agriculture staff spent eight hours a day on the phone surveying local livestock owners creating the searchable database, showing the approximate quantity and type of livestock.

“What we are able to do with this searchable database is, say we have a problem in a specific township and we decide that township, and perhaps on township all the way around needs to be evacuated, we can set that area up as our crisis area and from that we can just find out immediately how many cattle, how many bison and so on,” Raven says.

The idea came from watching the struggles other municipalities in the Peace Country faced when it came to emergencies such as wildfires or floods. One of the most recent examples that Raven used is the Bear Hole Lake fire from earlier this year, which was on the BC side of the border. Due to the location of the fire the information about the fire came from the BC Forest Service, so when landowners on the Alberta side of the border tried to get the information they were told ‘we can’t talk to you because you are in Alberta, so once your forest service talks to our forest service and so forth,’ which Raven says left landowners upset and frustrated.

“There was an activation of the emergency command centre and we were a part of that. So what happened was we looked at where the fire was, where it had potential to move,” Raven says. “Using the database we had at the time we were able to search the two townships closest to it and say okay we have x number of animals, x number of this, this is what is happening, these are the people we need to go talk to.”

She says one by one they reached out to the different landowners that the database identified. Once they called around to the people that were felt to be impacted by the escalating situation they found there was one slight gap in the process, and that was there were people who had cattle summering in the area who were not a part of the database. In these situations, the neighbour telegraph, one of the most effective forms of communication out there according to Raven, was used to get ahold of these individuals and ensure that nobody was left behind.

“It worked incredibly well, and we continued to give them updates every day as we got them, and so they would get a phone call once a day, and we would tell them okay this is what we know, this is what is happening, this is what is not happening, and this is the information that we have up to date. The response that we got from people was that they really appreciated that, because at least they were getting some information, and they have some connection.”

Raven says she has first-hand experience with these types of emergencies after a wildfire ran through her family’s ranch back in 2003. At the time her family was fortunate enough to get most of the livestock off the property, minus a couple of hundred head of yearlings that they couldn’t get out. One of the main things she noticed during that situation was the amount of time wasted by arguments between the landowners and forestry. With forestry telling the landowner they can’t go back into the area, and the landowner advocating to go back and take care of their animals.

“From that, from watching it, experiencing it, seeing the hard feelings and the aftermath, I thought man we don’t need that, we just don’t need that,” Raven says. “Watching what happened up in Mackenzie County and out by Manning and those huge fires there certainly brought it all back and it certainly made me realize that we need some sort of plan. Fortunately, the Ag Service Board was all over it and thought it was a great idea, – I think having a basic understanding of what it is like to be in the middle of an emergency gave me a deeper understanding.”

Raven adds that she was able to spearhead this project from two sides. The first is the side of the land and livestock owner who is in the emergency, and the second is from a municipal point of view, of what needs to be done, what official resources need to be brought in or consulted etc.

Raven says that currently the database is 80% complete, but if livestock owners have not been surveyed and would like to be a part of the program they can call the Agriculture Department at 780-532-9727.