UPDATE: Grande Prairie man turns himself in after fentanyl seizure

UPDATE: ALERT says Justin Myles Stuart has turned himself in after an investigation into fentanyl trafficking in Grande Prairie.

A search warrant was done on Stuart’s home on the 9000 block of 105th Avenue in the Swan City on July 22nd but he was not found. Police seized 423 fentanyl pills, 21 grams of methamphetamine as well as $1530 in cash proceeds from crime.

During the search, three people were arrested. All three of 29 year old Laurie Willier, 34 year old Abel Araya and 22 year old Eden Maclean have been charged with two counts of possession for the purpose of trafficking and possession of proceeds of crime. Araya is also facing breach charges.

The investigation began in June after officers received tips about a fentanyl dealer in the area.

If anyone knows where Stuart is, contact police or Crimestoppers. 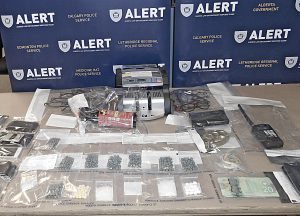