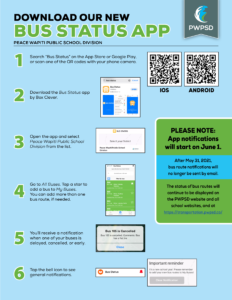 PWPSD Transportation Director Ted Gobin says the decision to start up the app-based system in June is because the likelihood of bus cancellations is far lower than in the winter months.

The division will be showing the status of the bus routes on the division’s website alongside all the school websites in the division for anyone who does not have access to a mobile device. Gobin says they decided to transition to an app-based system after many requests from families to follow that direction.

“The change is both necessary in keeping with the expectations of cell phone users,” he adds.

The “Bus Status” app is available on both IOS and Android devices.