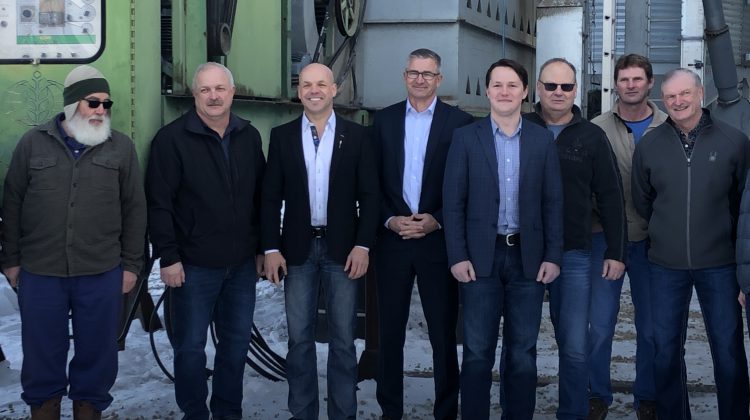 Coming off a declared agriculture emergency, farmers in the Grande Prairie area could a way to try and claw back some of their potential lost crop. Minister of Agriculture and Forestry Devin Dreeshen was at Mercer Head Farm Monday morning to reveal details of the Efficient Grain Dryer Program.

The provincial project is aimed at helping cover the costs of eligible grain dryer improvements. It is also retroactive to April 2018, which means around 100 farmers who have gone through the application process already remain in the queue without having to re-start.

Minister Dreeshen says grain and canola farmers in the Grande Prairie region have been hit hard over the last few years, with another wet summer and early snowfall only compounding things in 2019.

“The last harvest was one of the toughest for Alberta farmers. Poor weather, trade irritants, rail strikes and a carbon tax have all hurt farmers through no fault of their own. This new program will help farmers remain competitive and keep producing the best high-quality food in the world.”

The County of Grande Prairie, along with the MD of Greenview, Saddle Hills County and other municipal governments, declared an agricultural disaster last fall. Officials in November said at that time, regional farmers were trailing behind the average harvest process by about 25 per cent.

Dreeshen says those in the area have already done a lot on their own to try and make the best of a bad situation, but says the government is trying to keep on top of any potential future issues.

“That’s something we’ve heard loud and clear from farmers, whether it’s trade irritants or increases in carbon taxes, their margin is being squeezed and usually of no fault of their own.”

Applicants will reportedly be able to choose equipment that makes sense for the size and volume of their agri-business and improve energy efficiency within their operations. In all, around $2 million will be available under the grant, with the government footing half of the total bill for upgrades, and farm owners responsible for the other half.

The grant will be funded through the Canadian Agricultural Partnership.