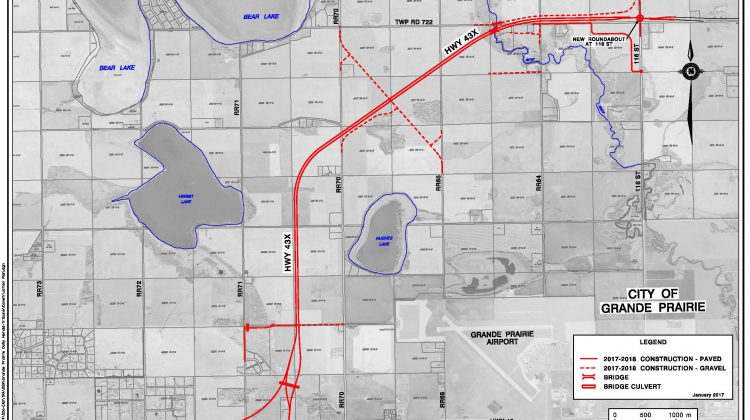 Plans for the Highway 43X bypass (supplied by Alberta Transportation)

Drivers could be using the Highway 43X bypass by the end of August. Despite some delays, Alberta Transportation Regional Director Ryan Konowalyk says the project is well on its way to being done.

“There’s a traffic disruption west of Grande Prairie on Highway 43 as we’re making the new intersection and tie in there; that should be done in a couple of weeks and the rest of the bypass should be open to traffic by the end of August.”

The $54 million bypass project was announced in April 2016 with construction originally expected to start that spring. Construction didn’t actually start until the spring of 2017.

A portion of the bypass was finished several years ago from the intersection of Highway 43 and Highway 2 west to 116th Street. This portion of the project will complete another 12 kilometres from 116 Street to Richmond Hill. It also included adding three bridges to cross the Bear River.

Work was then scheduled to wrap up in October of 2018 but was extended into spring of 2019 due to wet conditions. Because of that, Konowalyk says they’re trying to play catch up.

“Through 2017 and 2018 there were a number of wet summers I guess I would call it, weather delays and that’s why we’re running into 2019 here to get this thing finished.”

The roundabout portion of the project, as well as all the bridges along the route, were completed last fall. The cost of the construction contract on the project was $38 million.