The aquatics facility at the Eastlink Centre has been named one of the best indoor pools in Canada. The accolades come from Chatelaine magazine, which included the Grande Prairie pool in its list of the country’s 12 best indoor pools. 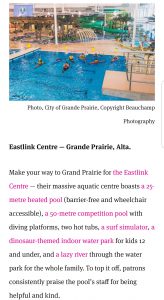 It notes that the 25-metre pool is heated and is barrier-free and wheelchair accessible. The magazine also points out the 50-metre competition pool with diving boards, two hot tubs, the FlowRider, the water park and the lazy river.

“To top it off,” author Rachel Chen adds, “patrons consistently praise the pool’s staff for being helpful and kind.”

City of Grande Prairie Aquatics Manager Meghan Monette believes it’s the number of different features in the pool area that earned it the national nod.

“I think the variety of activities that are available for all age levels is what really secured us this placement. It was a nomination from our members and our guests, so it really shows that they really enjoy the facility.”

While the list was only published last week, Monette says the Eastlink Centre found out about the recognition in December 2018.

“We were ecstatic when we found out. We were extremely proud to be nominated for an award of this nature.”

The Eastlink Centre opened as the multiplex in December 2011. It has hosted provincial, national and international swim events.