PWSD Superintendent hangs up his hat 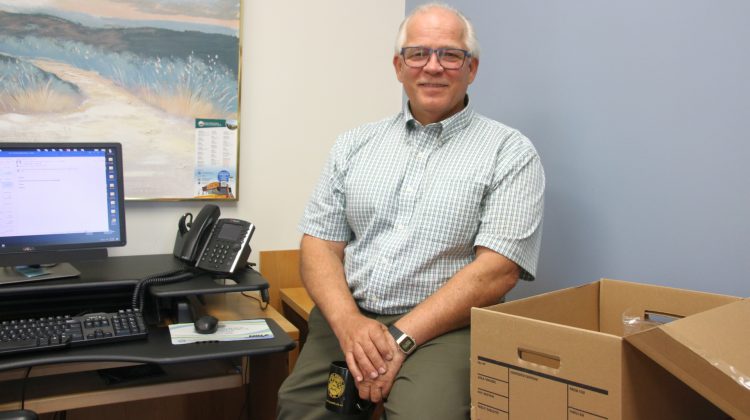 Last week may have marked the last week of classes for local students, but it was a bigger milestone for Sheldon Rowe. The Peace Wapiti School Division superintendent is retiring this summer after nearly 38 years as an educator in the Peace country.

Although he considered a career in business, Rowe says he always planned on becoming a superintendent.

“Look at my grade 12 yearbook. You’re supposed to put in what you want to do and I had down, ‘The Superintendent.’ It was either that or maybe an accountant, and like any grade 12 I said, ‘well, if I become a teacher I get my summer holidays,’ so that made the choice.”

Rowe says he was lucky to have the support of his wife as his career progressed, and says it worked for them as he advanced at the same pace as his children aged. However, he warns anyone with similar career aspirations that liking children is an important part of the job.

“Getting to that excellence requires a combination between community, parents, access to resources, access to community libraries, additional science clubs; all those things that you might find in more urban areas that we have a more difficult time providing.”

Being in a more rural area also affects the number of students who pursue post-secondary education. Rowe says he would have also liked to see those transition rates improve in his division.

“Grande Prairie doesn’t have the same opportunities maybe that Edmonton does. They have multiple post-secondary [schools] and we know through some research that was done by the Grande Prairie Regional College that geography can be a bigger barrier than race to whether or not you go on to post-secondary.”

Rowe considers GPRC working to become a university and high school dual credit programs a start, but also hopes to see something along the lines of additional supports for students who chose to move to a bigger city.

While Rowe is officially retiring, it’s unlikely his next few years will all be spent babysitting his grandchildren, travelling, and volunteering. He says he’ll eventually be looking for a part-time job, likely in education.

“My first job was when I was in grade nine and I’m wondering what people do when they’re not working, so I’m going to find out. My plan is to continually annoy my children by phoning them at work and telling them I’m not.”

The PWSD board decided on a replacement five months ago but is waiting for the appointment to be approved by Alberta’s Minister of Education. He’s recently undertaken a superintendent review, which has delayed the process.

“Following a review by Alberta Education, the Minister approves or rejects the appointment within one month. We expect the full process to be complete within 4-6 weeks.”

Rowe still has some vacation days banked and a few things to do around the office before he can officially call it quits.