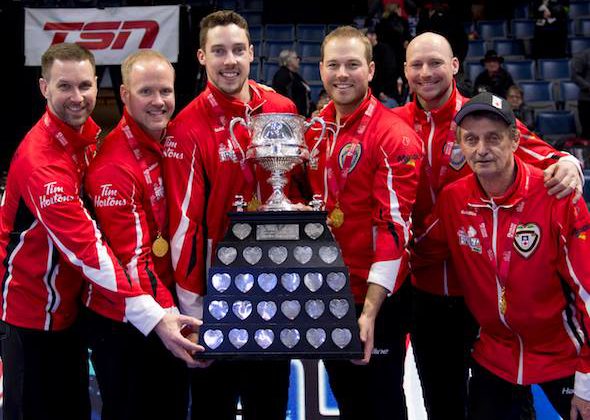 This year’s Brier win was a completely different experience for Team Gushue. They came into the national men’s curling championship as Team Canada, and came out on top for the second year in a row.

Grande Prairie’s Tom Sallows again joined the rink as fifth. He says that even though they were the defending champions, it was still a special experience.

“The guys played so good this week and it seemed like they were in control pretty much every game and in control of their own destiny the whole week. I’m not going to say it was easy or expected, but we went into that final with such confidence.”

Gushue beat Alberta’s Brendan Bottcher 6-4 in Sunday’s final. Alberta was the only team to get the best of them in the round-robin, but Sallows says they weren’t shaken.

“That was our worst game and they played really well – they’re an amazing team as well – but it was more of a wake up call to get back to work and not get too far ahead of ourselves. It was mid-week, so it was almost like a reset for us and we cruised to another Brier victory.”

Up next for Team Gushue, which also features Beaverlodge’s Geoff Walker as lead, is the Princess Auto Elite 10 in Winnipeg starting Thursday. Then they will be off to Las Vegas for the men’s world championship March 31st to April 8th.

This will be Sallows’ third appearance as an alternate at world’s – 2017 with Brad Gushue and 2015 with Pat Simmons – but he says it will be a new challenge not being at home.

“The other two were in Canada, which was an awesome experience; wearing the maple leaf in Canada was pretty cool, but now this year’s we’re going to the States and Vegas after the U.S. just won gold at the Olympics.”

He has full confidence in Gushue, third Mark Nichols, second Brett Gallant, and Walker, and even though Sweden’s Niklas Edin is ranked first in the world, he believes the Newfoundland and Labrador rink has the four best players. He adds they’re grateful for the support they’ve gotten from across the country.

Still celebrating! Thanks for all the support