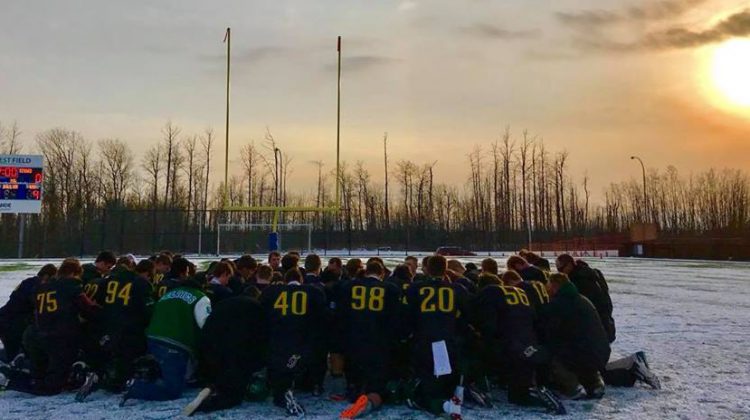 Starting at 1:30 p.m. on Saturday, November 11th, the #7 ranked Peace Wapiti Titans will take on the #4 ranked St. Albert Skyhawks at the Community Knowledge Campus stadium. It’s a rematch from last year’s tier III northern semi-final, which saw the Skyhawks advance with a 22-17 win in Edmonton.

It’s also the seventh straight year that St. Albert has qualified for provincials, while this is only PWA’s second. However, they won seven games this year and made it to their first ever Peace Bowl last weekend. They fell to the St. Joe’s Celtics 36-0.

The #1 ranked Celtics will then take on the #6 ranked Paul Kane Blues at the CKC field for the tier II northern semi-finals, with kickoff at 4 p.m. This is the fourth time in five years that the two teams have started the playoffs together.

While the Blues took the first matchup in 2013, the last three games have all gone the Celtics’ way. They were also champions in 2014.

The Sexsmith Sabres will also be in action this weekend, although on the road. They’ll be travelling across the province to Cold Lake to take on the Royals in the tier IV northern semi-finals.

Although the #4 ranked Sabres have qualified for provincials for 14 seasons in a row, they have yet to win a championship. The #8 ranked Royals have also gone without, and the ASAA expects it to be a fun matchup. They play at 1 p.m. Saturday.