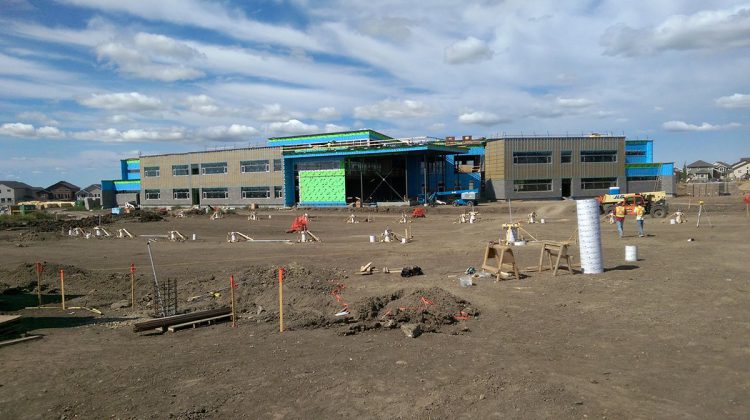 Construction of Whispering Ridge Community School as of August 2017, PWSD

Students at Harry Balfour School are making the best of a tight situation until the new school in Whispering Ridge opens up. Peace Wapiti School Division Superintendent Sheldon Rowe says they started all the students that will be moving mid-year in the same classes.

“They’ll be organized into classes of all Whispering Ridge kids with Whispering Ridge teachers so that over the Christmas holidays, when the change occurs, that group of students and teachers will be able to get up and move as a unit.”

The building is scheduled to open in January 2018 and Rowe says construction is still on schedule for that timeline. Roughly half of the population will then move to Whispering Ridge Community School, which is being opened as a K-8 school. Plans originally called for the school to open in the fall of 2017 and for the older students to be phased in.

Harry Balfour has close to 800 students last year, and Rowe says it was crowded when there were 600. A replacement is on the province’s sunshine list.

Also getting major upgrades over the past year have been the schools in Bezanson and Teepee Creek. Bezanson has three new modulars to work with, and Teepee Creek underwent a nearly $3.75 million modernization.

Construction crews are just finishing up the outside of the Teepee Creek facility, and there’s only minor work left to be done. Rowe says the school district is grateful the work could happen while the school was still open. Doing so meant students didn’t have to be bussed to another school during construction.

“The staff organized themselves so that a classroom could be modernized and then kids would move into that classroom, empty up a new one, and we’d modernize it. It took us quite a bit longer, but we were able to do it while the facility was still in place.”

PWSD is anticipating enrolment to go up by about 80 students this year, but won’t know final numbers until later this month. If that’s the case, Rowe says they’ll he happy.

“The economy looks far more positive than it did a year ago, employment is up… so things are looking good for us, but we need to wait and see.”

Roughly 4,000 out of PWSD’s 6,000 students take a bus to school, so Rowe recommends students and parents sign up for transportation notifications to let them know if their route is delayed or cancelled.