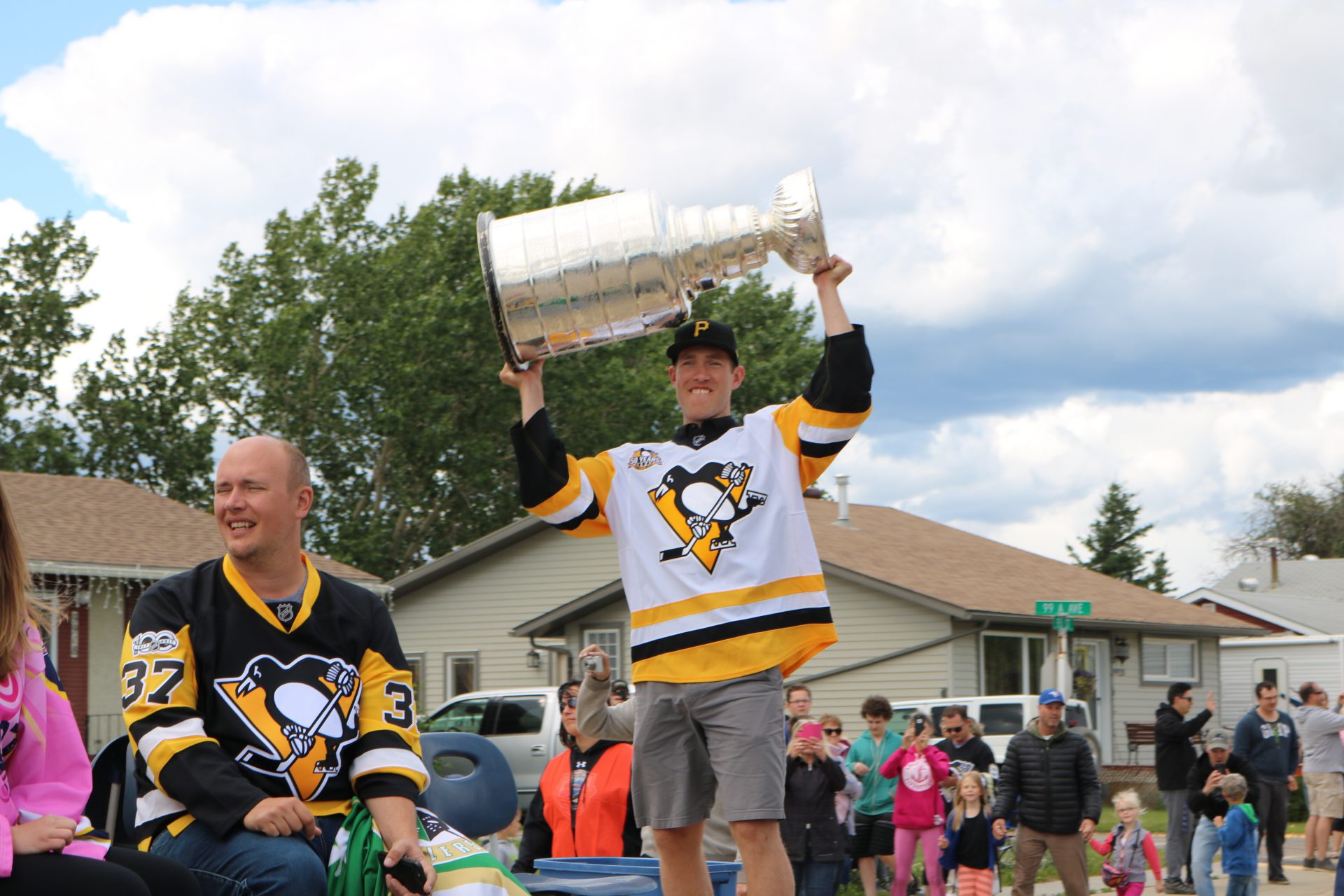 He could have done anything he wanted on his day with the cup, and he chose to bring it home to Sexsmith. The town of 2,620 was host to Stanley Cup champion Carter Rowney and Lord Stanley’s cup on Sunday, as the former Grande Prairie Storm player paraded through town and took pictures with fans in his hometown.

“Everybody just has a level of pride,” says County of Grande Prairie Division 9 councillor Corey Beck, “because we have a local who’s able to go out and accomplish what so many want to and dream when they walk into an arena, but never get a chance to do.”

Rowney’s family joined him on his parade wagon, and he was led by the local fire department and hockey teams. Sexsmith mayor Claude Legace estimates roughly 2,000 people lined the streets to get a glimpse.

“Carter was really gracious and stopped on the parade route, took some pictures with people,” he says. “They must have come from far away.”

28 year old Rowney was called up as a rookie by the Pittsburgh Penguins in January, and won the cup with the team in June. The parade and meet and greet was put together in just a few days, and town councillor and arena manager Clinton Froehlick says he’s impressed by how well the event went.

“I never would have guessed there was going to be this many people here. It’s been unbelievable. Huge thanks to Carter and his wife and little baby and the Rowney family; they’ve been a huge help.”

Froehlick also believes Sunday was one of the biggest in Sexsmith’s history, a sentiment also shared by Legace and Beck.

“This is by far number one,” says Froehlick. “My wife jokingly said, ‘is this day better than when we got married or when we had kids?’ You know, no comment, so to speak. You don’t know what the right answer is. It’s definitely high up there on things I’ve done.”

“It’s actually pretty phenomenal that the hometown boy decided to bring it back to Sexsmith and let everybody here experience a little bit of that magic as it hasn’t happened before, so it’s pretty cool,” adds Beck.

Rowney also made an appearance at the Teepee Creek Stampede with a replica cup on Friday, July 14th. Before the festivities on the 16th, Legace says they gave Rowney a key to the town to honour him.

“It’s never before done before but the Stanley Cup has never been here.”

“Not just hockey, but for all sports. If you work hard and you’re willing to do the time, you know what? Anything’s possible.”