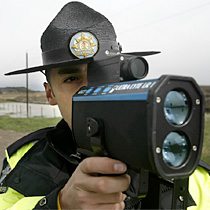 The number of tickets handed out in school zones dropped in the second half of September, but they’re still being called disturbing. In total, 1,146 were issued for speeding, 162 for parking violations, and another 35 for issues like distracted driving and not using a car seat. Peace Officer Sergeant Gordon McMahon says some people were caught going over 70 kilometres an hour.

While the vast majority of the tickets given out in the first month of classes were for speeding, but several others were for parking and other violations like U-turns. Sergeant McMahon says congestion problems can be dealt with by dropping children off a couple blocks away from school, something parents should feel comfortable doing.

“The Boogeyman isn’t out there. Statistics show it’s safe for kids to walk, especially during morning hours. We don’t have people snatching children off the street; that paranoia has just gone too far. It’s much more dangerous to drop them off in the middle of the road and have them run between vehicles.”

On a positive note, several of the parking tickets came from the Operation Traffic Watch program, through which people can report violations they see when officers aren’t around.

“There was actually 21 tickets issued from concerned parents who filled out the Operation Traffic Watch form and said, ‘I’m willing to go to court on this, and here’s a picture of this vehicle sitting in a school crosswalk.’ People that we basically aren’t there to catch at that particular time are still getting a consequence.”

McMahon says they’re going to continue to educate through enforcement and patrols.