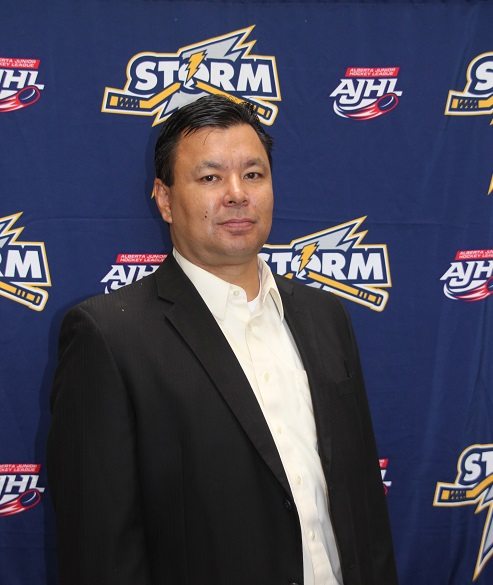 The Grande Prairie Storm training camp runs this weekend, and so far, Head Coach Kevin Higo says the difference between this year and his first on the job in 2014 is night and day.

“I don’t really need a game roster; I know who everybody is, where last year I was trying to figure out not only veterans but rookies as well. We’re just a whole year ahead; our planning, our preparation. We’ve already got our hotels done, our buses, and we feel that much farther ahead and it’s going to be that much more beneficial for us.”

Along with several returning players, there is also a large contingent of locals from the Peace region.
Higo says this year’s camp will be more about preparation than assessment.

“We want to get habits going right away. We have a larger returning group, so it should be easier to establish that kind of stuff, but instead of us doing evaluation drills on the ice on Saturday, it’s going to be more of this is the way we want to play and see if guys can do it.”

After last year’s younger, less experienced group, Higo wants to see the team be harder to play against with a more uptempo game. He doesn’t expect any players to top the league offensively, so it will be more of a team effort.

The players will have fitness testing tonight and public ice times Saturday and Sunday, with about 40 expected to take part in the Brian Nash Memorial Cup, all at Revolution Arena. Higo says he’d like that to have that whittled down to 30 by the time they head to Camrose on August 27th. This year’s teams are named after and will be coached former captains Spencer Bettensen and Andrew Buote.

The puck drops on the wrap up game at 7:30 p.m. on August 23rd, in honour of Nash, who helped found the club and passed away in 2010. All of the funds raised by the $10 tickers go to a memorial scholarship in his name.