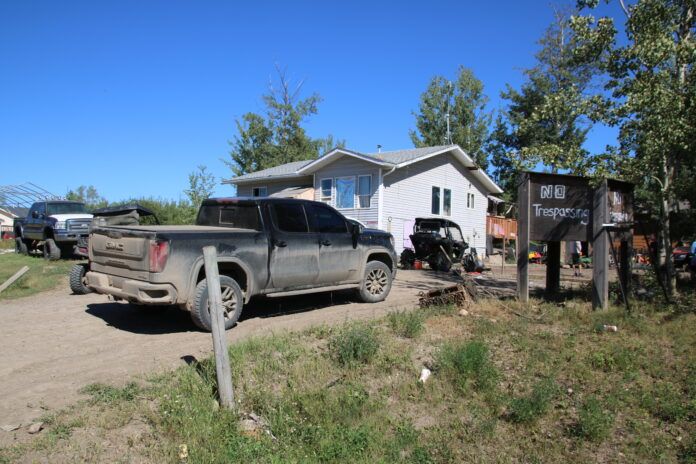 A so-called drug house on Horse Lake First Nation is being boarded up after a reported raid by the RCMP Thursday morning. Councillor Chantille Petroski says officers showed up at Lot 54 around 11:40 a.m., an action she says was a long-time coming.

“This house has been problematic for years now and the nation members have been constantly letting us know of the illegal activity going on here,” she explains. “People with no jobs shouldn’t have this much stuff in their yards and so many people going in and out… we’re just fed up with it.”

Some of the complaints included suspicion of drug dealing, people coming and going at all times of day, noise issues, and what Petroski refers to as a “junkyard”. The property is filled with several vehicles, a trailer, multiple quads and other off-highway vehicles, and watercraft, among other things.

After the mounties finished, the home was turned over to band staff to deal with, as it is owned by the First Nation. It will be gutted and locked up and all of the vehicles and junk will be removed from the yard. Petroski hopes that the flurry of activity in the community of more than 500 sends a message that it won’t tolerate anyone bringing in criminal activity.

“It’s sad and it’s bittersweet that it had to come down to this but I’m glad it’s being done because if we’re not doing anything then they’re just going to think that they can continue to do it and that’s why they’ve always continued to do it.”

That sentiment is echoed by Charlie Horseman Sr., who was on the property Thursday helping clean up. He says he and fellow community members have taken it upon themselves to make ill-intentioned outsiders feel unwelcome.

“I’m sick of that. The constant thieving and the traffic coming, the thieves coming here, flocking here because it’s a drug house… It wouldn’t end if we didn’t start doing something… I’d rather drive them away and have them live in fear of my community because of guys like me.”

Both Petroski and Horseman are concerned that Horse Lake First Nation’s reputation gets hurt by people from outside of the community using it for criminal activity, like bringing in drugs and stolen property that are later found and reported to the public. Petroski adds that when it comes to their own members getting involved, they want to help.

“We don’t hate them. It just seems like this is the only option that we have and hopefully it helps them turn their life around and be like, ‘you know what? This isn’t worth it,’ and they will start seeing the programs that are here to help them get on their feet. Go to treatment, get back here, go see [the Indigenous Skills and Employment Training Program] to get their tickets, all the training that comes, and they can be working in no time.”

The Indigenous Skills and Employment Training (ISET) Program is offered to help members get funding for training and skills development so they can find jobs and fill job gaps.

Another big focus of programming is on helping youth. A mental health workshop on anxiety this week drew 18 youth, a group is held multiple times a week with activities to keep them busy, and a cultural camp held this summer saw roughly 100 students attend.

Moving forward, members are encouraged to continue to report suspicious activity and make complaints to the band office and police, as documentation can help lead to action like Thursday’s arrests.