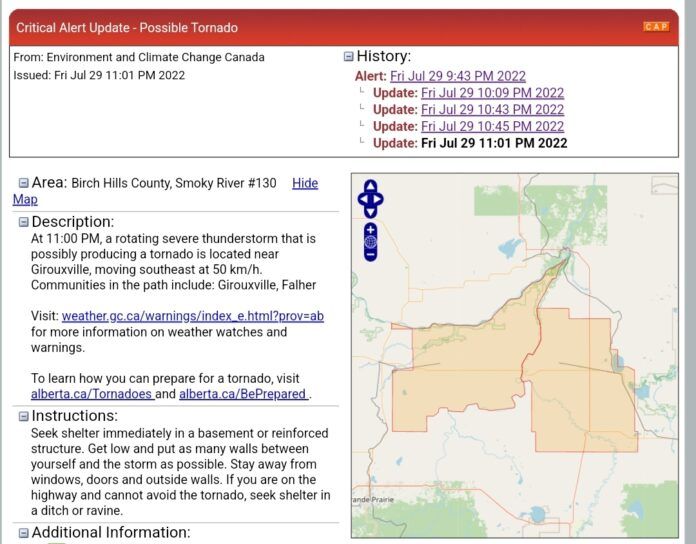 UPDATE #6: The tornado warning for the MD of Greenview, MD of Smoky River, and Big Lakes County has ended, along with the tornado watch for Peace River – Fairview – High Prairie – Manning.

UPDATE #5: The possible tornado alert has ended as of 11:54 p.m. along with the tornado warning for Birch Hills County. Severe thunderstorm warnings have beee issued for the MD of Greenview near Valleyview and New Fish Creek, Big Lakes County near High Prairie and Winagami Lake, and the MD of Smoky River including Falher, McLennan, and Guy.

UPDATE #4: As of 11 p.m., the storm is near Girouxville, moving southeast at 50 kilometres per hour. Girouxville amd Falher are in its path.

UPDATE #3: The tornado warning for the MD of Fairview and MD of Peace has ended. One continues for Birch Hills County, which is now the focus of the Alberta Emergency Alert.

As of 10:45 p.m., Environment Canada says a rotating severe thunderstorm that is possibly producing a tornado is located 10 kilometres north of Tangent, moving southeast at 50 kilometres per hour. Tangent and Girouxville are in its path.

A tornado warning has also been issued for the MD of Smoky River, including Falher, McLennan, and Guy.

UPDATE: The tornado warning has been extended to include the Municipal District of Peace, including Grimshaw and Berwyn, and Birch Hills County near Eaglesham and Highway 740.

People in the Fairview area are being encouraged to seek shelter due to the possibility of a tornado. Environment and Climate Change Canada has issued a critical alert for the region, along with a tornado warning.

It warns that as of 9:40 p.m. Friday a rotating severe thunderstorm that is possibly producing a tornado is northwest of the town moving southeast at 40 kilometres per hour. Fairview is in its path.

“This is a dangerous and potentially life-threatening situation,” the warning reads.

“If you hear a roaring sound or see a funnel cloud, swirling debris near the ground, flying debris, or any threatening weather approaching, take shelter immediately.”

An emergency alert instructs people in the area to seek shelter immediately in a basement or reinforced structure.

“Get low and put as many walls between yourself and the storm as possible. Stay away from windows, doors and outside walls. If you are on the highway and cannot avoid the tornado, seek shelter in a ditch or ravine.”

“Leave mobile homes, vehicles, tents, trailers and other temporary or free-standing shelter, and move to a strong building if you can,” the warning adds. “As a last resort, lie in a low spot and protect your head from flying debris.”

Tornado warnings are issued when imminent or occurring thunderstorms are likely to produce or are producing tornadoes.