UPDATE: Police say Zyanna Connor was located safe and returned to her home.

Police have reached out to the public for help finding a missing teen. 14-year-old Zyanna Connor was last seen May 18th and is believed to be in the Grande Prairie area. 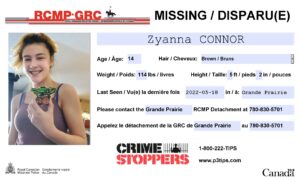 The RCMP says there is a concern for Zyanna’s wellbeing. Anyone with information on her whereabouts is asked to contact the Grande Prairie detachment at 780-830-5700 or Crime Stoppers to remain anonymous.