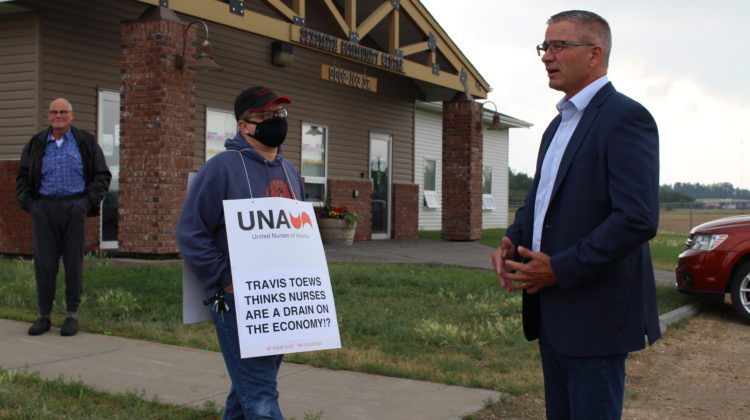 Finance Minister and Grande Prairie—Wapiti MLA Travis Toews met briefly with peaceful protesters on Tuesday, to hear concerns from members of the local representatives of the United Nurses of Alberta.

President of UNA Local 207 Jerry MacDonald, who led the small gathering of nurses and medical personnel outside of a planned Toews townhall in Sexsmith, says he simply wanted to ask the minister to negotiate in good faith.

“We don’t feel respected now that we are back to the bargaining table, the employers are following the direction of your government, and we do not feel we are being treated with the respect we have earned,” he says.

MacDonald says the proposition on the table, which includes a three per cent wage rollback and three year wage freeze, is unacceptable.

“We want to ask you to number one, withdraw the direction you’ve given to Alberta Health Services and Covenant Health for wage cuts and layoffs and all those other things we are dealing with,” he says.

“Allow AHS, Covenant Health, and the unions to negotiate fairly and in good faith without interference from government.”

“In terms of AHS bargaining with UFA in good faith to an outcome that is really fair for our hard-working nurses and respects our fiscal situation, I’m all about that. I’m looking forward to a mutually acceptable outcome where we can go forward together.”

The United Nurses of Alberta says the proposed cuts would affect upwards of 30,000 nurses and support staff.