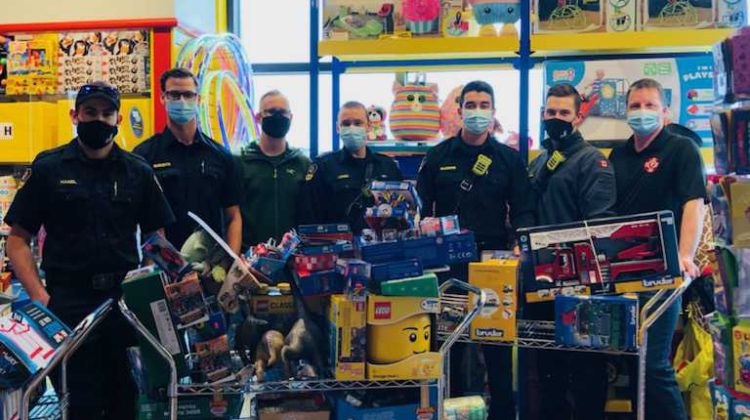 A group of County of Grande Prairie firefighters have returned to the scene of Whispering Ridge Community School, but switched up their trucks and fire hoses for toys and books. Members of the Community Foundation for the County of Grande Prairie Firefighters and International Association of Firefighters Local 5108 dropped off approximately $5,500 worth of goods to help replace items destroyed by fire last month not covered by insurance.

Foundation President Matt Bauer says they were happy to spring into action when they heard of the dilemma faced by school staff members.

“Any items that the teachers supplied themselves weren’t covered by insurance, so those teachers would have to replace those items by themselves,” he says. In all, toys and books were delivered to six teachers and classrooms at the facility.

Bauer says it’s not very often fire officials get to return to the scene of a blaze, and when they had an opportunity to do so, they were more than happy to respond. He adds it was also interesting to see how far the school had come following the fire.

“The guys did great jobs stopping that fire in the portables so the school wasn’t damaged completely,” he says. “The kids seemed really excited watching us bring the toys in, teachers and administration seemed very thankful, it was definitely happy faces all around.”

The portable classrooms at the back of Whispering Ridge Community School were damaged by a fire early in the morning of April 11th. No one was injured as a result and the cause of the fire was not released.