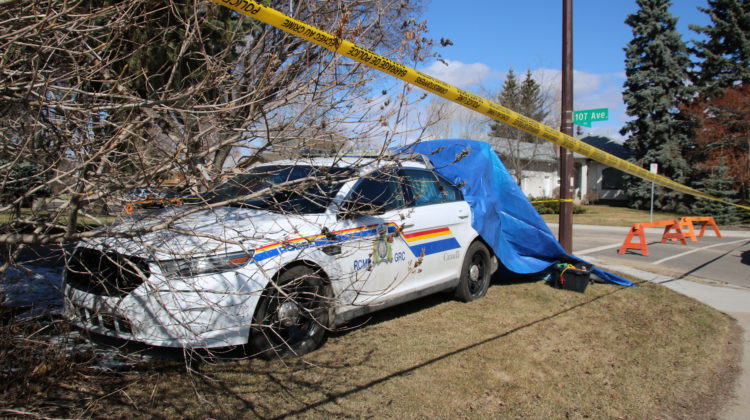 The scene of a crash between an RCMP cruiser and a bicycle at 107 Avenue and 98 Street on April 24, 2021 (Erica Fisher, MyGrandePrairieNow.com staff)

The cyclist seriously injured when hit by an RCMP cruiser was being pursued by police at the time. That’s the latest from the Alberta Serious Incident Response Team, which is investigating the actions of the Grande Prairie RCMP leading up to the crash.

ASIRT says officers in two police vehicles were investigating two suspicious men in the area of 108 Avenue and 99 Street around 3:10 a.m. on April 24th. They were found with bicycles, one of which was towing a large square safe strapped to a metal dolly.

The man with the safe was taken into custody, and it was later determined the safe was stolen. It’s alleged that the second man fled the scene on a bike, heading toward 107 Avenue.

According to the ASIRT report, that’s when the third cruiser got involved. It was directed to find the fleeing suspect, who was found heading east on 107 Avenue between 99 Street and 98 Street.

It’s reported the man on the bike left the road and was heading diagonally across the lawn of a house, with the police vehicle close behind. He was hit in the side yard of the home at the corner of 107 Avenue and 98 Street at roughly 3:22 a.m. and suffered serious injuries.

Police administered first aid to the man until the arrival of EMS. The 28-year-old remains in hospital in stable condition.

ASIRT says its investigation will examine the actions of police to determine if they were lawful, while the mounties will maintain responsibility for the investigation into the man and his actions. ASIRT investigates events where serious injury or death may have been caused by police and serious or sensitive allegations of police misconduct.