Allard, Loewen among MLAs calling for new restrictions to be dropped 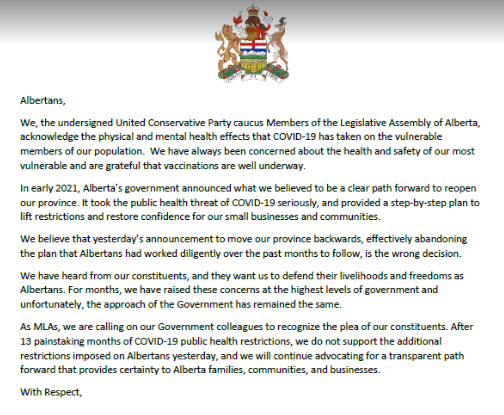 The letter to Albertans from 15 UCP MLAs. Two more have since signed on (MLA Drew Barnes, Facebook)

“In early 2021, the government announced what they believed to be a clear path forward to reopen our province,” says a letter addressed to all Albertans released on Wednesday.

“It took the public health threat of COVID-19 seriously, and provided a step-by-step plan to lift restrictions and restore confidence for our small businesses and communities,” it letter continues.

The group, which also includes Central Peace—Notley MLA Todd Loewen, says the decision to enforce tighter restrictions goes against that plan. They add their constituents want their livelihoods and freedoms defended, and are calling on their government colleagues to recognize those pleas.

As of midnight Tuesday, stricter retail capacity limits down to 15 per cent of total occupancy, and a return to one-on-one only fitness training were put into place by the province. Starting noon Friday, in-person dining at restaurants will be off the table as well.