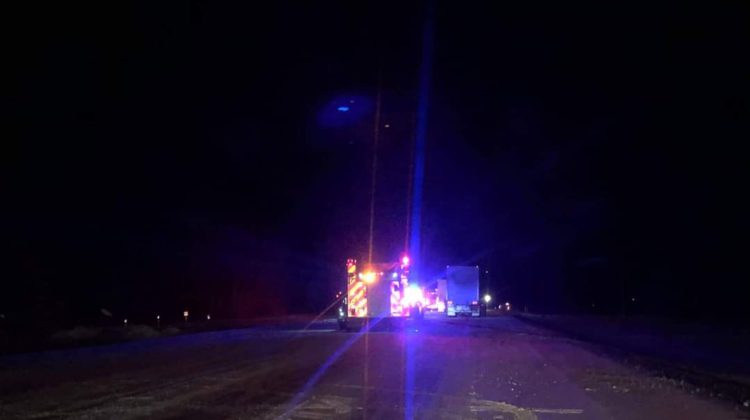 Highway 2 is closed at Township Road 744A (Supplied, William Vavrek)

UPDATE #2: Grande Prairie RCMP has confirmed that Friday morning’s crash between a semi and car on Highway 2 was fatal. The 39-year-old Grande Prairie resident driving the car was pronounced dead at the scene.

Police say their preliminary investigation has shown that the car was heading southbound around 5:15 a.m. when it crossed over into oncoming traffic and crashed with the semi southbound. The driver of the truck suffered minor injuries and was treated at the scene.

An investigation with an RCMP Collision Analyst is underway. Mounties note the name of the deceased will not be released and no further public updates are expected.

UPDATE: 511 Alberta reports the highway has fully reopened as of 4:20 p.m. Friday.

Traffic on Highway 2 is currently blocked by a crash involving a car and a semi truck at Township Road 744A. Police say both lanes are blocked and traffic is being diverted around the scene near Webster.

Grande Prairie RCMP says drivers in the area should expect delays for an extended period of time as officers investigate. In the meantime, people are asked to consider taking a different route.