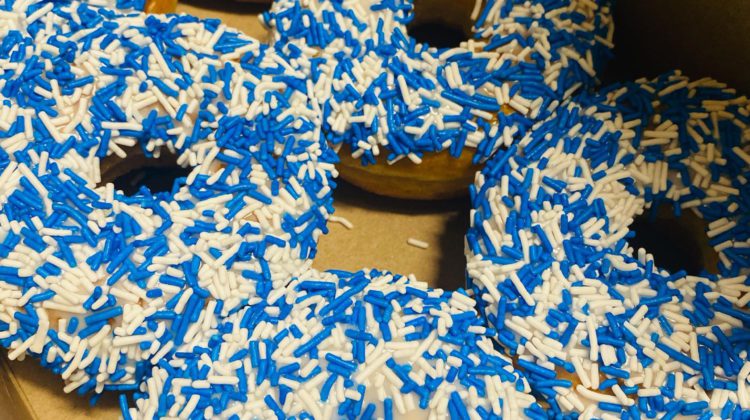 Tim Hortons in Peace River and Valleyview are selling "Max's Donuts" as a way to raise money and contribute to funding a Zolgesma treatment for Mighty Max Sych. (Supplied)

The Tim Hortons in Valleyview and Peace River are raising money to help fund a Zolgesmsa treatment for Mighty Max Sych. The two locations are selling “Max’s Donut”, with all proceeds from the sales going to the Sych family in Fairview.

Gordon Drummond, owner of the Peace River and Valleyview Tim Hortons locations, says the fundraiser was a spur-of-the-moment decision, which caught the team off guard with its immediate success.

“I think on our first day we sold approximately 1,300 donuts,” he explains. “The fact that we did around 1,300 on the first day is an indicator that it did touch people’s hearts.”

Two-year-old Max was diagnosed with Spinal Muscular Atrophy Type 2 in November 2020. The rare neuromuscular disorder results in muscle wasting and the loss of motor neurons. Motor neurons control movement in the arms, legs, chest, face, throat, and tongue. The damage leads to difficulty speaking, walking, breathing, and swallowing in patients.

A Zolgesma gene therapy treatment is estimated to cost roughly $2.8 million and typically must be administered in infants before their second birthday. If a child is too old, the treatment risks failure. 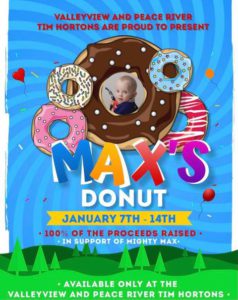 Tim Hortons in Peace River and Valleyview are selling “Max’s Donuts” as a way to raise money and contribute to funding a Zolgesma treatment for Mighty Max Sych. (Supplied)

Drummond adds the team ran into problems keeping donuts in stock in the first days of the fundraiser due to the speed of sales, despite a lack of advertising.

“We didn’t advertise; we just put it on Facebook and said, ‘hey, this is what we’re doing, we want to get behind this and we think it’s a great community story.'”

“Kids that have challenges health-wise or any challenge at all is pretty near and dear to our hearts… so it resonated with us and our director of operations said ‘you know we should really get behind this program.’ It just felt right,” he adds.

The fundraiser has been running since January 7th and will continue until the 14th. Drummond adds it’s a great way for people who have heard about the story to contribute to a good cause.

Donations to Mighty Max can also be made through the family’s GoFundMe page.