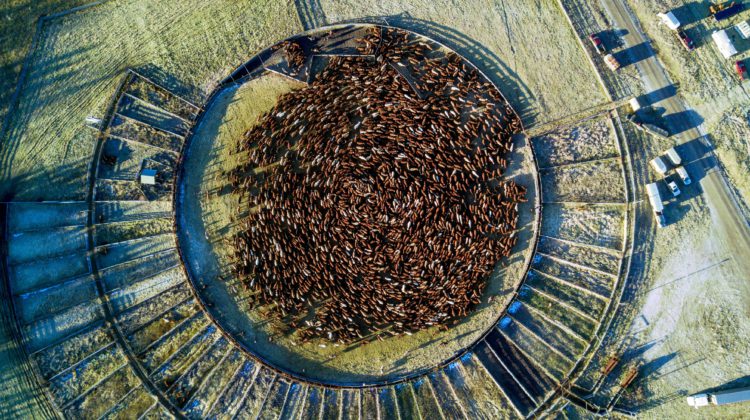 A drone shot of the circular corral at which RoundUp, produced by the National Film Board was shot and recorded. (Supplied, Vadim Stolyarov)

A new short soundscape documentary filmed in the Peace Country has been published by the National Film Board. Titled “RoundUP” and directed by Nettie Wild, the intent of the film is to attract an audience with strong visuals and sounds of cattle.

Wild says she was inspired to direct the film after seeing an image of the Sunset Prairie corral near Dawson Creek, at which the film was primarily shot.

“I thought, wow, this is [an] image that is so powerful, beautiful, mysterious, troubling… that I’m going to make a movie without any words. The images can carry the entire film.”

“The sound of the herd is extraordinary. It’s really deep and huge, it’s like a massive choir that bounces off all the hills and mountains,” says Wild.

Moving from the big screen for which Wild primarily produces content, she says creating a story told in a little over three minutes for social media was a departure for her. The hope, she says, is for the project to resonate with a broad audience.

“I really believe that in these controversial times, art has a bigger and bigger role. I think that if we do our job right as artists, that we can throw images out there that are so captivating and alluring that it will pull people into another way of being.”

“You might not even know exactly what it is, but it’s really captivating as you watch from high up… this extraordinary image of thousands of cows moving around this circular corral,” she says.

According to Wild, RoundUp was shot and assembled by some of the best in the country. Patrick McLaughlin was brought in as the videographer, and the audio was compiled by Brent Calkin, Nancy Tam, Michael Brockington, Andy Malcolm, and Sandra Fox.

RoundUp is available to view for free on Facebook and Youtube, as well as through the National Film Board.