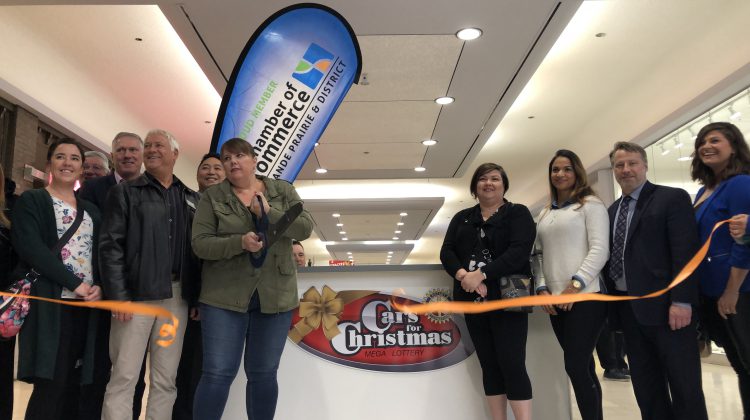 The ribbon cutting to kick off the 2019 Cars for Christmas Lottery (Michael Lumsden, mygrandeprairienow.com staff)

The Swan City Rotary Club is seeking help from the local community in a last-minute push to raise $75,000 for eight regional food banks through the Cars for Christmas Lottery. Until November 1st, Swan City Rotary is donating a dollar from every lottery ticket sold.

As of October 26th, the lottery has raised $31,093 for regional food banks. Swan City Rotary’s Tab Pollock says in previous years, the local community has made a habit of waiting until the last minute to buy their tickets, and he hopes to see the same surge of sales before the deadline this year.

“There’s a lot of last-minute buy-in in Grande Prairie and area, and we could use the support,” he says.

In addition to supporting regional food banks, the Cars for Christmas Lottery is also supporting 13 local groups, including Big Brothers Big Sisters of Grande Prairie and Area, Grande Prairie Gymnastics Society, IMPACT GP, and the Centre for Creative Arts among others.

Due to concerns and restrictions brought about due to the ongoing COVID-19 pandemic, the usual kiosk normally set up in the Prairie Mall was unable to be displayed throughout most of October, prompting ticket sales to be made online and over the phone. Pollock says Rotary is happy with the money that has been raised so far, and people seem to have adapted to the new normal, but there’s always a higher bar to reach for.

“People understand it’s not a typical year and they’re willing to jump online and buy their tickets,” he says. “I think people want to help out wherever they can and they know they can support the lottery and help out a bunch of groups, as well as the food bank which is of course in need. We’d love to sell out. The more money we raise, the more money we give back to all those groups and that’s really what it’s all about.”

The Swan City Rotary Club opened its in-person kiosk on October 27th and it will be there through the remainder of the campaign.