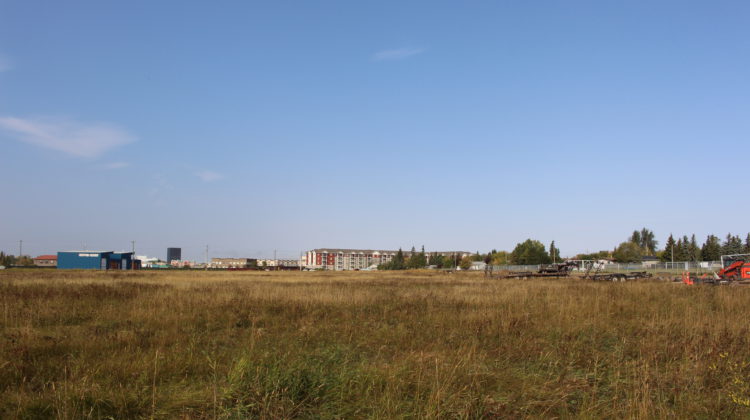 The parcel of land known as the "Smith Subdivision" in Grande Prairie (Michael Lumsden, mygrandeprairienow.com staff)

The proposed recreation centre in the Smith subdivision is one step closer to reality after members of Grande Prairie city council gave the go-ahead to the project on Tuesday. The 4.8-acre plot of real estate between Park Road and 93 Street is currently undeveloped, but Mayor Bill Given says the proposed “utilitarian” complex is something he is happy to see move forward.

“The facility is intended to be a multi-purpose facility that could fulfill a number of different needs in the community,” he says. “It will be a multi-use facility intended to meet a variety of recreational activities and needs and it hopes to be very flexible.”

Given adds a facility like this can also double as an emergency response centre if such a situation should arise.

“Over the last number of years we have seen a number of situations where there have been floods and fires and all sorts of different things happening, and we’ve recognized that open, flexible space like this can provide a great opportunity for a reception centre if there is need to house displaced people or residents.”

Given says the back and forth between members of council on the timelines, including a requirement to have construction completed by the end of 2021, was expected. He adds, however, that progress is being made, and council has to juggle community needs, and the scheduling obligations they agreed to when coming up with funding for the project.

“Ultimately this was the next step required in the process and will allow administration to develop the documents they need to with preparing the request for proposals or tendering for construction of the building and ultimately it moves us further down the road.”

“I think everyone understood at the time that would put some significant time restraints, but at the same time council wants to ensure that we still have some influence on where the building ultimately is located in the community,” Given adds.

Funding for the project, slated to be over $4 million, comes from the COVID-19 Resilience stream of the Investing in Canada Infrastructure program.