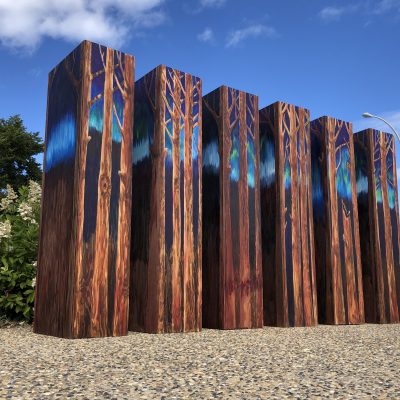 "Domino VI," as presented by the Art Gallery of Grande Prairie, by Carmen Haakstad. The display will be available to view at the facility until February 2021. (Supplied)

A unique new show is on display at the Art Gallery of Grande Prairie, intent on engaging viewers in what’s described as a “remarkable visual feat.” Domino VI is the sixth show in the “Domino” series and artist Carmen Haakstad intends for it to be the last.

Haakstad says he was inspired to begin the project in 2005 after an unorthodox chance encounter.

“I actually found a piece of wood… in 2005 [that] floated in from the Pacific Ocean and it had the word “Domino” on the back. I was contemplating [at the time] where I wanted to go with my work and things I was doing and the message came to me, and I said ‘is this it?'”

The show is Haakstad’s first as a full-time artist after retiring from his position as Vice-President, External Relations for Grande Prairie Regional College in the spring. Haakstad says he’s been enjoying the freedom to focus on his craft. He adds finally finishing Domino VI was, for him, a return to initial sketches done in February of this year.

The show consists of what he refers to as three-dimensional paintings, “packed with metaphors and symbolism,” from Haakstad’s life.

“I created these six domino boxes… and they have paintings on all three sides. You can see the landscapes that I do from my memory and my heart, loving the farm [I grew up on].”

Also on display are pieces he created in his youth, organized with guest curator Deb Courvoisier as a sort of prologue to the show, intended to provide some context for viewers. Haakstad says the ambition to be an artist has been something he has held very close.

“My mother actually saved my art portfolio from grade eight. That’s not part of the Domino show but it gives some context to where I came from as an artist.”

Art Gallery of Grande Prairie Executive Director Jeff Erbach says the Domino series is one that ties in with the history of the gallery, based on the length of time since its launch, as well as Haakstad’s relationship with the facility.

“The Domino series has been really prevalent in our community for a long time and it’s a show about a journey, and Carmen has an extraordinary journey himself, both in relation to the history of the gallery as one of the foremost founders of it, as the first director/curator, and then also that his passage is now working as a full-time artist.”

Erbach says the Domino VI gallery will be on display at the facility until early February 2021.