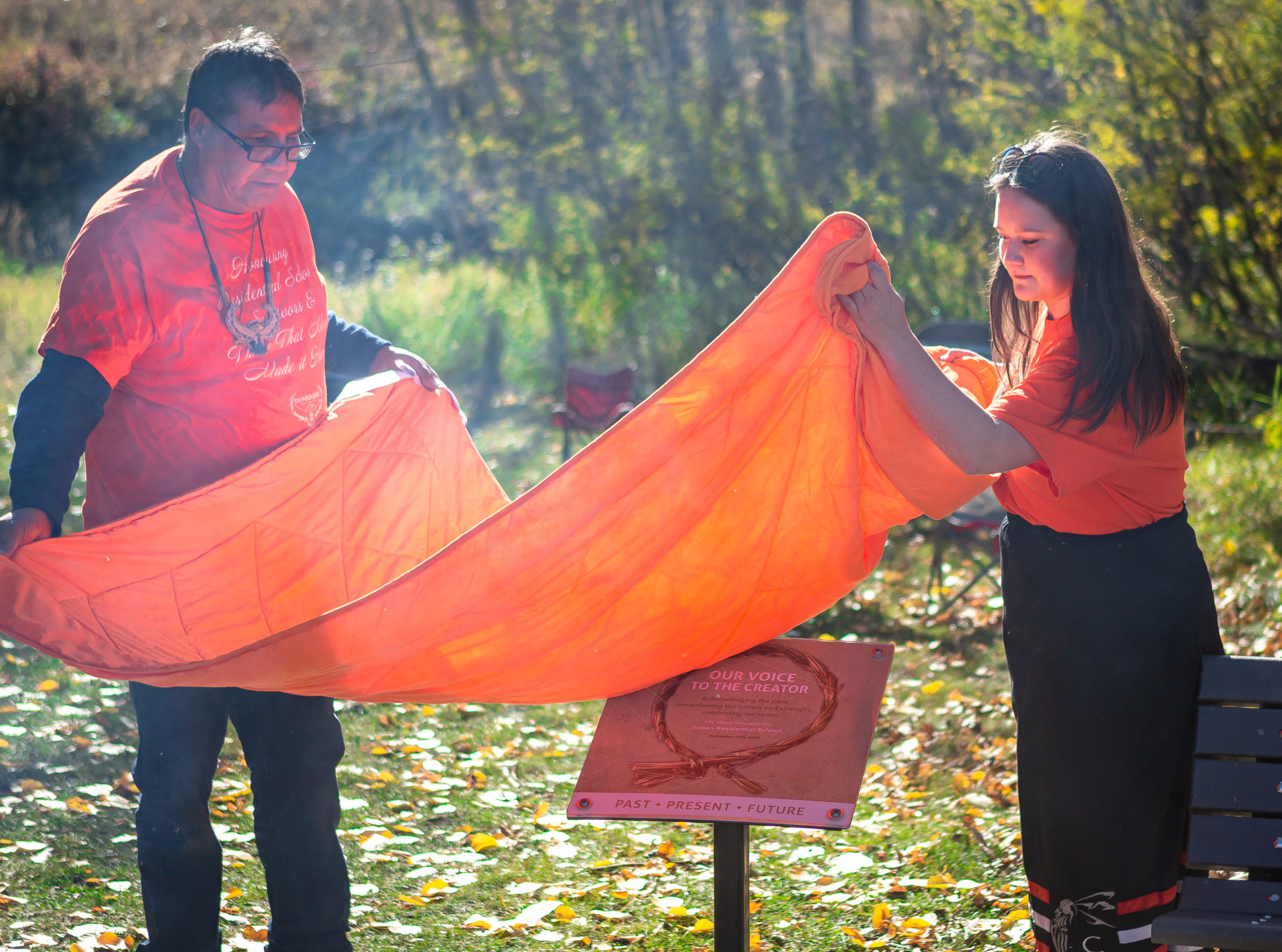 There is a new place in Grande Prarie to come to remember the impacts left behind in the wake of residential schools. At the conclusion of a fire ceremony and tea dance on Wednesday, a new bench and plaque commemorating those who are impacted by the residential school system were unveiled near the Bear Creek Reservoir.

The event was aligned with Orange Shirt Day, which occurs annually across Canada designed to educate people and promote awareness about the former residential school system.

Shauna Livesey, chair of the Orange Shirt Day Committee, says after the unveiling on Wednesday, the hope is for a positive future both for the bench as well as in the community.

“The bench was unveiled last year but unfortunately that bench was vandalized so both the plaque and the bench are new,” she says. “Orange Shirt Day isn’t just about today; it’s about every day and learning and remembering residential schools did impact many in this region and all across Canada.”

She adds that, despite the ongoing COVID-19 pandemic, engagement and awareness, particularly in the Grande Prairie area, has grown exponentially.

Councillor Eunice Friesen, who was invited to speak at the ceremony, says the city donating the land for the bench as well as the plaque is only the tip of the iceberg for what can be done to remember and offer reconciliation.

“One thing we did approve at council yesterday was [to] approve looking at having a position within the city that would help us improve the input of our Indigenous community in city activities and that’s one step but there are many, many more to be had,” she says. “I think movements like this, and ceremonies like this, and days like this help us collectively move towards a better place as society as a whole.”

Friesen adds she believes the city is making significant strides within the community, from the involvement of the school districts in the occasion to local businesses and industries being represented on-site and showing their support.
She argues small steps such as these are the beginnings of speaking and making decisions together as equals.

“What I still see happening is that often organizations will bring in an Indigenous liaison worker as an employee and what I would rather see happen is that Indigenous leaders begin coming to the tables where decisions are made.”

Among other projects that have been established around the city include the monument at Grande Prairie Regional College to Missing and Murdered Indigenous Women and Girls, which was unveiled in October 2019.