Only two new cases of COVID-19 reported in Peace Country 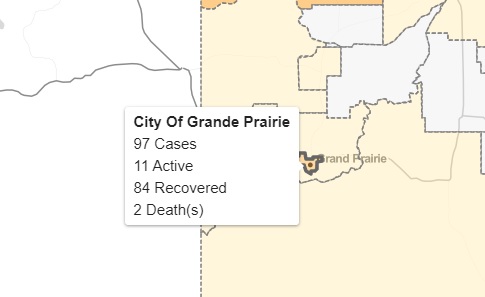 Only two new active cases of COVID-19 were recorded in the Peace Country today. (AHS, supplied.)

Additional recoveries were noted in all of the County of Grande Prairie, MD of Peace, MD of Fairview, MD of Spirit River, and Clear Hills County. The last of which recorded six recoveries, bringing the total active cases down to 15 in the municipality. Exactly 70 cases in that region are being considered to have fully recovered.

The AHS North Zone is down to 207 active cases of COVID-19. Only four people remain in hospitals, none of whom are currently in intensive care.

Across the province, 171 new active cases were recorded out of a total 12,540 tests completed on September 15th. Just over 92 per cent of cases in Alberta are being considered to have fully recovered from the virus. Of the active cases remaining, 38 people remain hospitalized, six of whom are in intensive care. No fatalities were recorded since the previous update. Thus far, 893,747 people have been tested province-wide.