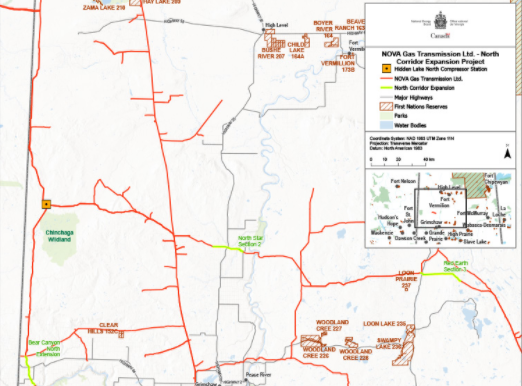 A new pipeline project in the Peace River area has the support of the Canada Energy Regular. It has found NOVA Gas Transmission Ltd.’s North Corridor Expansion Project to be in the public interest and has recommended it be approved by the federal cabinet.

What’s proposed is 81 kilometres of looped pipeline built and operated out of the Peace River region to move gas from NGTL’s Peace River Project area to growing markets. It includes three loops, a compressor station, and launcher and receiver facilities.

As part of the CER’s recommendation, it has included 34 conditions construction activities, safety measures and standards, environmental monitoring, caribou habitat protection, and matters related to Indigenous peoples. A total of 22 people spoke as part of the project’s review, including 12 Indigenous peoples, seven industry representatives, and three government departments.

“The Commission is of the view that any potential Project impacts on the rights and interests of affected Indigenous peoples can be effectively addressed by the mitigation measures, accommodations, and commitments made by NGTL, and the conditions recommended and imposed by the Commission.”

NGTL says the construction phase of the project will be worth around $529 million, with 80 per cent of the economic activity occurring in Alberta. It adds that the project is expected to create 3,480 full-time equivalent person-years of employment in Alberta alone.