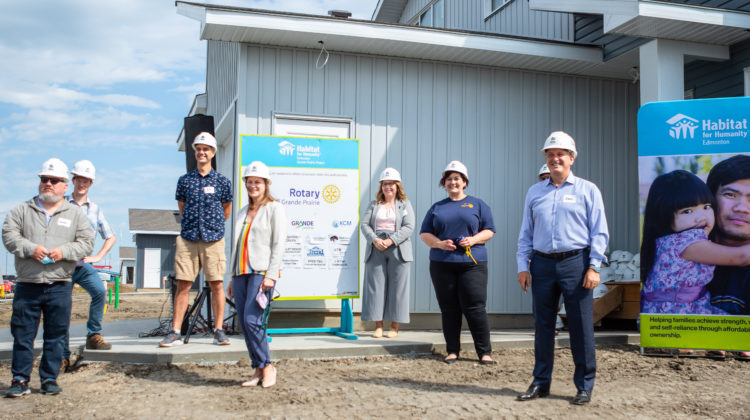 City of Grande Prairie, Rotary Club of Grande Prairie, and Habitat for Humanity officials stand before one of eight new and future homes designated for sponsored families who were deemed in need of the extra support. Rotary has donated $980,000 to the project. (John Watson, MyGrandePrairieNow Staff)

Completion of the first of four Habitat for Humanity duplexes, funded by donations from the Rotary Club of Grande Prairie was celebrated Thursday. The project, which received $980,000 in 2019, will allow eight families to be housed affordably within the city upon its completion.

Rotary Club of Grande Prairie President, Tyla Savard says much of the funding was produced through the annual dream home lottery.

“We ended up having a couple of years where we didn’t spend all of our funds— of course, it is gaming funds so we’re only able to hold onto it for so long, so last year that’s how we were able to do some pretty awesome things such as this project,” she says.

The initial plan was to build two duplexes, which would have adequately housed four families. Savard adds, Habitat for Humanity was then able to procure matching grants to double the funds; and double the housing builds.

John Caputo says the efforts to double the size of the project would not have been possible without the aid of all the partners that got involved.

Currently, three families have been selected to fill the new houses.