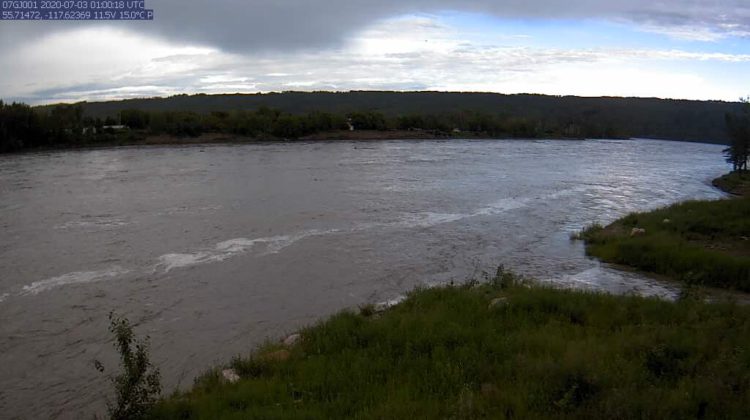 Water levels on the Smoky River at Watino as of 7 p.m on July 2, 2020 (Water Survey of Canada, Alberta Environment and Parks)

The province has issued a new flood warning for the Smoky River at Watino in the Peace River Basin. Alberta Environment and Parks says water levels at the Hamlet of Watino could reach levels as high or higher than what was seen in 1990 and 1972.

The Central Peace Regional Emergency Management Agency issued an alert Thursday afternoon, warning people in the area to prepare for possible evacuation. The province adds the eastern third of the hamlet could be affected, as well as the Highway 49 bridge and agricultural areas.

“The peak water levels are currently expected late July 3rd into the morning of July 4th.”

A new flood watch has also been issued for the Wapiti River in the Peace River Basin, as water levels have risen three metres. Highway 666 is flooded by O’Brien Provincial Park, and it’s noted other low-lying areas could be impacted.

A flood watch remains in effect for the Simonette River. Alberta Environment and Parks says water levels are nearing their peak and have risen 2.5 metres, reaching similar levels to 2017 when the Simonette River Campground was reported to have been impacted.