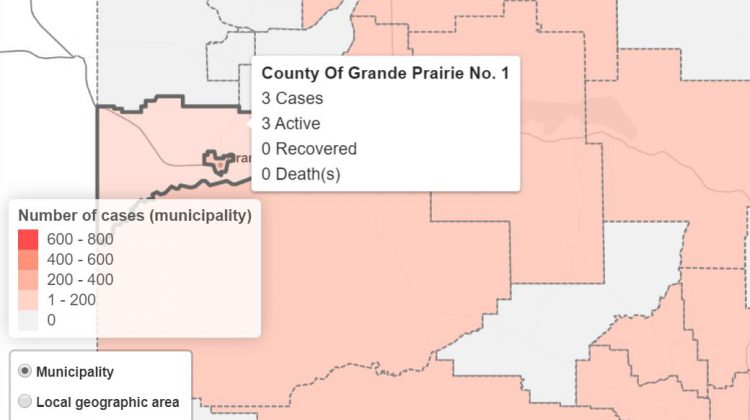 There are three active cases of COVID-19 in the County of Grande Prairie (Alberta.ca)

The number of confirmed cases of COVID-19 in Alberta rose by 49 Friday, bringing the total to 1,500. Seven more deaths were reported, the highest number seen in a single day, including five in the Calgary zone and two in the Edmonton zone.

Four were residents of the McKenzie Towne continuing care facility. A total of 17 people from the home have now passed away from the virus.

Workers at continuing care facilities are now required to wear masks at all times when providing direct patient care or working in patient care areas. They will also only be able to work at one long term care or supportive living sites in an effort to reduce the spread between locations, starting next week.

There has been no change to the number of cases in the North zone over the past day. There have been 97 cases confirmed out of 5,883 tests done.

One of the confirmed cases of COVID-19 in the County of Grande Prairie that had previously been reported to be recovered is once again classified as active. The data on the provincial government’s website was updated to reflect that Friday, without context.

As of April 10th there are three active cases in the County, and two recovered in the City of Grande Prairie. There is one active and one recovered case in the MD of Greenview and 29 in the MD of Smoky River, of which there have been five recoveries and two deaths.

In Big Lakes County, there have been 15 confirmed cases, including five recoveries and one death. The MD of Peace has reported six cases, of which all but one have recovered. Northern Sunrise County has three recovered cases, the County of Northern Lights has one active, as does Mackenzie County.

Provincially, 713 cases are considered to be recovered, there are 48 people in hospital, and 13 in the ICU. 201 cases are suspected of being community acquired.

Albertans are strongly encouraged to stay home this long weekend.