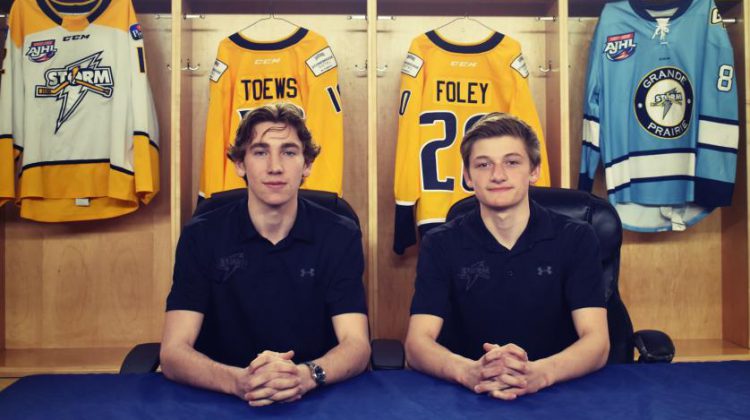 The Grande Prairie Storm has signed two local players to its roster for the upcoming season. The team announced the signing of right-winger Ty Toews and center Hudson Foley to the Alberta Junior Hockey League on March 17th.

Toews looks to bring his vast hockey IQ coming out of the Alberta Minor Hockey League in Grande Prairie to the AJHL. In his last midget season, Toews recorded a point per game in both the regular season and five playoff games and lead his team in points and goals with 14 and 33 respectively. He suited up to help out the Storm for six games this past season.

The Storm’s forward group is gaining Foley, who spent the previous season with the Grande Peace Midget Storm. He was third overall in goals with 10 and third in points with 27. The two-way forward also recorded two points in four games while up with the junior A Storm last season.

The Grande Prairie Storm finished the 2019-2020 season with a first-round playoff loss to the Spruce Grove Saints.

‘COVID-19 infections expected to peak in May’: Premier Jason Kenney