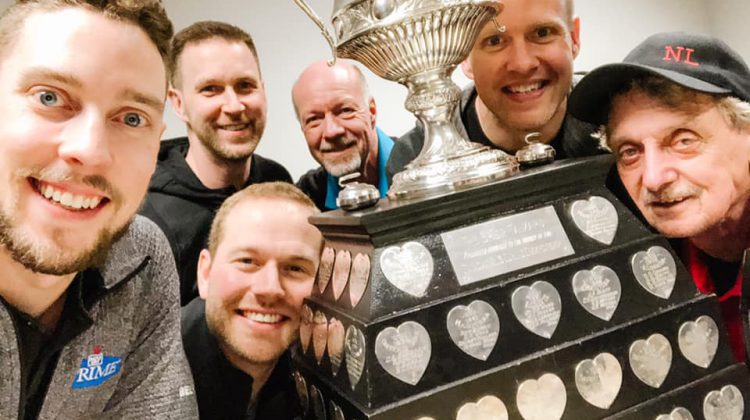 UPDATE: The World Men’s Curling Championships in Glasgow have been cancelled due to COVID-19 concerns, following the decision by the Grand Slam of Curling to cancel the two remaining events of the season.

Team Gushue says it supports the decisions, although with disappointment.

“We are disappointed that our season has ended and that we will not get the opportunity to represent Canada at the World Championships. But the safety of spectators, volunteers, athletes and officials is paramount at this time. Globally we are facing a pandemic and it is everyone’s responsibility to slow the spread of COVID19 and protect society’s most vulnerable.”

Beaverlodge’s Geoff Walker says he is still coming to terms with having won his third Brier championship. The curler, as part of Brad Gushue’s Newfoundland-based rink, topped Team Alberta 7-3 Sunday for the title.

Walker’s crew also took the 2017 and 2018 titles. He says, for most people who make it to the professional level, winning once would be a dream come true, but to win three in under a decade makes him feel like he is living a dream.

“Nine years ago when I made the leap of faith and moved out to St. John’s to join the team… to win three over that time is pretty unbelievable.”

Walker, who now resides in Edmonton, says it is a prize he shares with members of his hometown, as without the support of the community, his friends, and family, as he’s come a long way from his days at the three sheet curling club.

“Coming from Beaverlodge, we have the three sheeter and that’s where it all started. I’m grateful that I was able to stick with it, worked hard and obviously caught a lot of breaks… I think it just shows that anybody can do it.”

He adds he’s hopeful for a repeat of the celebrations he was able to take part in the first time team Gushue took home the top spot at the biggest national event in Men’s Curling during the Beaverlodge Fair 150 celebrations in 2017.

“One of the last times I was up there it was one of the fair weekends in Beaverlodge, and I was able to bring the tankard back and go into the parade with that, so it was a lot of fun.”

Walker and the rest of Team Gushue will now represent Canada at the 2020 Men’s Curling World Championships in Scotland with the event set to run from March 28th-April 5th.