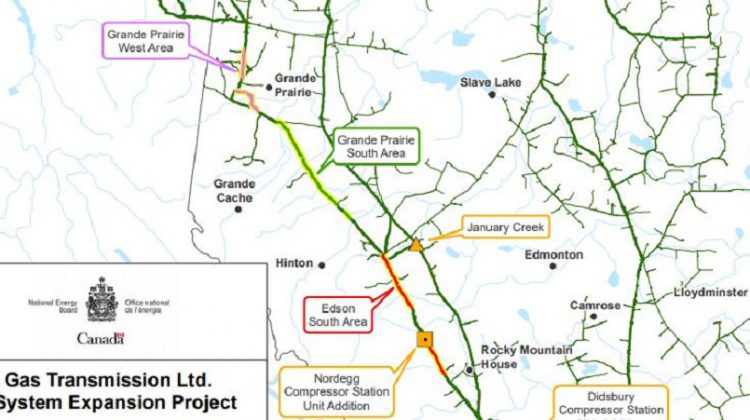 It’s been determined that a pipeline expansion project in the Grande Prairie area is in the public interest. The Canada Energy Regulator is recommending that the federal cabinet approve NOVA Gas Transmission Ltd.’s 2021 System Expansion Project.

The project includes roughly 344 kilometres of natural gas pipeline in eight loops, as well as three additional compressor station units. It would start near Grande Prairie and end just north of Calgary. Most of the land used is next to existing rights of ways and facilities.

The CER’s decision comes after a review involving more than 50 participants from Indigenous groups, industry, and federal and provincial departments. The commission says it found considerable benefits, including increased market access for Canadian natural gas, job creation, and capacity building for local and Indigenous communities and businesses.

Among the negatives are likely adverse effects to the Little Smoky Caribou Range, as well as to the abilities of Indigenous people to access and use Crown land. Nearly 75 per cent of the project would be on provincial Crown land.

“The benefits and burdens of any project are never distributed evenly across the country,” the commission notes in its recommendation report. “In light of these circumstances, reasonable people can and will disagree on what the best balance and outcome is for Canadians.”

It’s argued that with NGTL’s mitigation plans, along with 34 recommended conditions, the project is also not likely to cause significant adverse environmental effects. The company plans to start operations by April 2021, at an estimated cost of $2.3 billion.