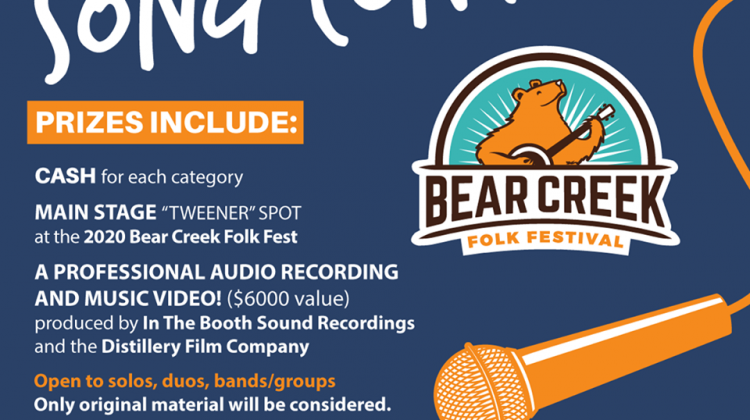 Applications are due by February 20th (supplied by Bear Creek Folk Festival, Facebook)

Organizers of the Bear Creek Folk Festival in Grande Prairie want to give one person the chance to take the main stage. Leading up to this year’s event, they will be hosting the first annual Bear Creek Song Contest.

Applications including an audio recording of the song you would like to submit are due online before February 20th.

All songs must be between two and a half and six minutes long, be original and owned by the performer. They will be judged on the quality and originality of lyrics as well as melody and structure, the engaging nature of the performance and overall memorable quality.

Prizes range from $500 to $1,000 cash and a main stage spot at the festival with the grand prize winner receiving a professional audio recording of their song from In the Booth Recordings and a professionally produced music video from The Distillery Film Company. The grand prize package is valued at $6,000.

Applicants selected to move on to the semi-finals will be notified by February 25th. Semi-final winners will then participate in the finals on March 13th at the KMSC Law Performing Arts Theatre.