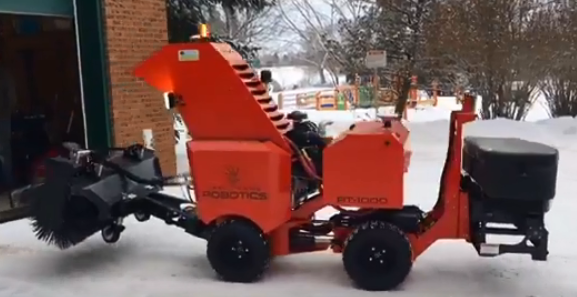 The City of Grande Prairie has unleashed a new automated snow clearing and ice control robot which will be patrolling the trails around Muskoseepi Park this winter.

The Left Hand Robotics produced RT-1000 is a fully autonomous snow-clearing robot that can clean upwards of 25 km of the trail before filling up, is also equipped with an attachment that allows for autonomous sanding and salting.

Senior Executive Advisor for Infrastructure and Economic Development Rory Tarant says following the success of the robotic lawnmower used at the South Bear Creek ball diamonds earlier this year, the city decided to take it a step further with Grande Prairie’s longest and coldest season.

“You look across the world as to how automation is moving things along, and trying to take some of those more mundane tasks and automate them so you can have staff focused on more higher-value tasks is the drive here.”

Tarant says GPS sensors guide the robot along a pre-programmed route and uses a 56-inch wide, round, motorized snowbrush to clear the trail or path accurately within two centimetres of the instructed route.

Grande Prairie, have you heard the news? We're pilot testing an autonomous snow-clearing robot on the trail around the Bear Creek Reservoir! We are excited to introduce to you the RT-1000 by Left Hand Robotics! It is a mean and lean snow plowing machine that can clear up to 25 km of trails on one tank of fuel. That means a more consistent level of service to keep our trail network clear in the winter and free-up staff for other, more complex tasks.The autonomous robot is outfitted with 360-degree cameras, safety mechanisms, and the latest hardware to keep it on a manually programmed path. Watch it in action below or learn more here: bit.ly/2PyxC92

Posted by City of Grande Prairie on Tuesday, December 17, 2019