UPDATE: One dead in Highway 40 crash 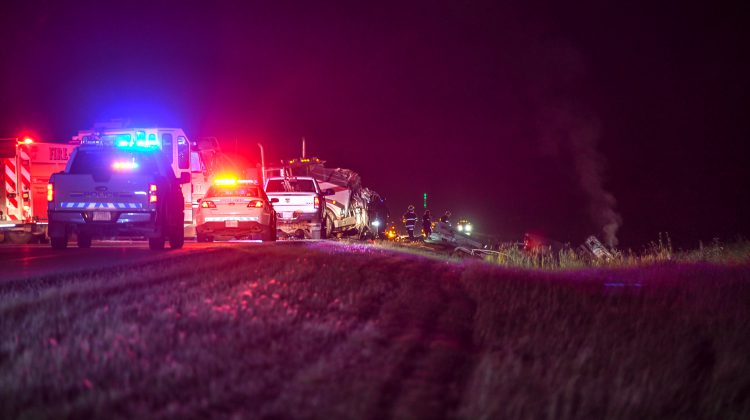 UPDATE #2: 511 Alberta reports the highway has cleared and has reopened to traffic.

UPDATE: Saturday morning’s crash on Highway 40 claimed a life and sent another person to hospital. Grande Prairie RCMP says a 42-year-old woman from Lethbridge was declared dead at the scene near Grovedale.

The crash happened around 1 a.m. near Township Road 692 between a northbound pickup truck driven alone by the deceased and a southbound semi truck. The semi’s driver was a 32-year-old man from Grande Prairie, who was taken to the QEII Hospital by STARS Air Ambulance with life-threatening injuries.

Grande Prairie RCMP is investigating with the help of an RCMP Collision Analyst.

“All possible contributing factors for this collision are being considered,” says Constable Candice Hrdlicka. “Our thoughts are with the families of both drivers at this time.”

Highway 40 remains closed for crews to clean up. Detours are still in effect in both directions.

The name of the deceased will not be released by RCMP.

Traffic on Highway is closed in both directions due to what the RCMP is calling a serious crash. Reports indicate the crash site is roughly a kilometre south of Township Road 692, which is the turn off to the Grovedale Fish Pond.

**UPDATE** Detour is available via twp 692 for southbound and twp 690 for northbound traffic.We are currently on scene…