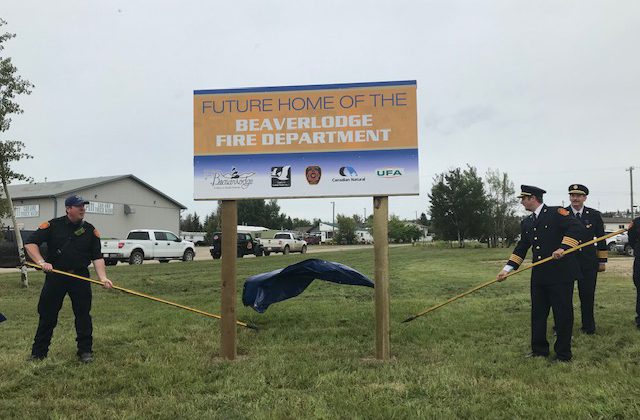 The Town of Beaverlodge has unveiled the new location of its fourth fire hall. Firefighters and town officials were on hand on Monday to show off the land where a new hall and training facility will be built on the site of the old UFA on 1st Avenue. Fire Chief Stan Metcalfe says the prospect of a new hall was a long time coming.

“Our current building was built in ’71 and was never intended to be a fire hall so we’re pretty happy to be here today unveiling the new lot where we can build a purpose built fire hall for the Town of Beaverlodge.”

The current fire hall is located on 10A Street which Metcalfe says barely has enough parking lot space for its members to park on. He adds that this new piece of land on the other hand is in a good location near the highway and believes it will give the department the most potential for future growth.

“If this is a 50 year project, how much is the Town of Beaverlodge going to expand, how much is the department going to expand as well as what are the training needs of our department and our region? We’ll be able to put that on here and have room to grow so that 50 years from now if we need to replace another building or add on to the building we’ll be able to do so.”

The price tag for the new hall is currently sitting around $1 million with $500,000 of that coming from the County of Grande Prairie. Metcalfe hopes to have the new hall open by the summer of 2020.