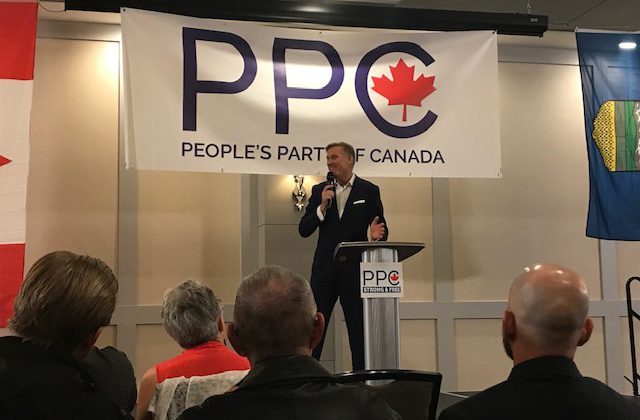 Maxime Bernier made a stop in Grande Prairie on Wednesday as part of a pre-federal election tour. Speaking to residents at the Pomeroy Hotel, Bernier discussed the platforms and policies of the people’s party of Canada, which he created.

“The most important for us is to change the equalization formula and be less generous. The other policy that is important is the pipelines and being sure to use the constitution. By doing that, we will be able to build the pipeline in this country by having the full jurisdiction and full authority to approve private sector pipelines.”

The longtime politician was first elected as a Conservative MP for the Beauce riding in Quebec in 2006. During his time there he held a number of positions including Minister of Industry and Minister of Foreign affairs.

He resigned from the Conservative party of Canada on August 23, 2018 and later formed the PPC. Grande Prairie is one of the stops on his 10-day tour of the province which also took him to Edmonton and Calgary.

While in the city he also announced his local candidate for the Grande Prairie/ Mackenzie riding, Doug Burchill. He becomes one of 32 candidates announced as running for the party in the province so far.

Burchill has a 30-year background as an engineer and a small business owner. Bernier says if people here want their voices heard in Ottawa, they should vote for Burchill.

“I hope the people here will support Doug and will support a candidate that wants to be sure that this province and this community will be freer and more prosperous.”

The federal election will take place on or before October 21st.