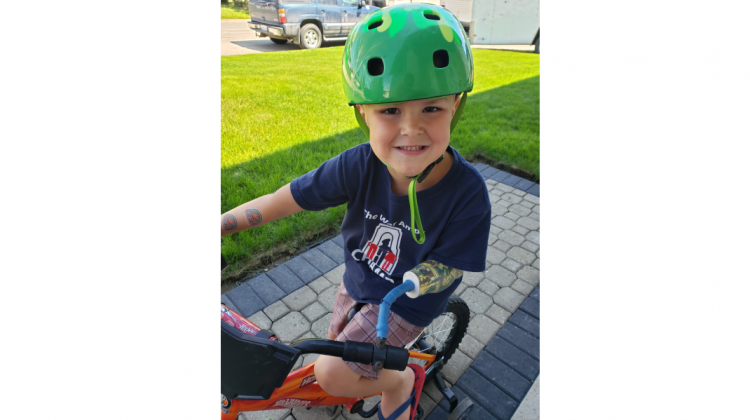 Five-year-old Abel Diemand was born without a left arm, but thanks to the War Amps Child Amputee Program, he won’t be slowed down. The Grande Prairie youngster was recently fitted with a device that allows him to hold on to a bicycle handlebar using a clamp.

“He can ride a bike without it, but he’s not sitting straight so it makes steering harder,” says his mother Martha Diemand.

The fully funded $5,000 attachment is considered a recreational extra, which means it cannot be covered by insurance or government funding. Diemand says it wouldn’t have been a possibility if it weren’t for the opportunities provided by CHAMP to get the item.

“The fact he can pick the patterns he has on that socket, he loves it every time, and it’s a thrill for him to pick what he is going to do for the next one.”

The money was made available solely through public funding, which primarily comes from two of the War Amps’ major fundraising initiatives.

“The War Amps receives no government grants, but with the public’s continued support of the Key Tag and Address Label Service, our vital programs for amputees will carry on long into the future,” says Danita Chisholm, Executive Director of CHAMP.

Diemand says her son is aware that is physically different than his fellow classmates at school. However, she hopes items like the bike attachment will continue to reinforce the idea that nothing can stop him from sharing the same experiences they do.