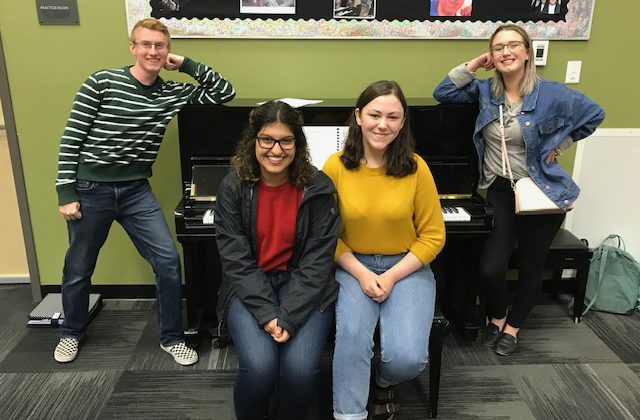 A number of local music students are celebrating after competing at the provincial music festival in Edmonton earlier this month.

Choirs, solo singers, and musicians all placed first or second in their categories including the Grande Prairie Public School District Treble Choir, which placed first in the Choral ensemble category.

This was Comp Grade 11 student Maryam Khandani’s first time going to provincials. She says she was a little worried about the outcome until she heard the groups final recorded version.

“When we actually sang it I kind of felt like ‘oh we didn’t do so well like there were some things we could have changed,’ but then we heard the recording back and we were like yeah we deserve this.”

The treble choir is made up of students from Charles Spencer High School and Composite High School. Provincials are by invitation and both the Treble Choir and the GPPSD Concert Choir received recommendations to go based on their local performances back in April.

Comp Grade 11 student Madison Berger agreed, saying she was surprised to find out they won but once they did it was great to be recognized.

“I think it was just really rewarding to take some of the pieces that we’ve worked on really hard for so long to be able to go and show those to other people and kind of prove to other people that we know what we’re doing and that we deserve the attention.”

This event was Charles Spencer Grade 10 student Camryn Wright and Grade 11 student Joel Longson’s second time at provincials. Looking back they both agree that it was great to go and be with others like them.

“It was really good… not only to just perform was a great experience but also to get with like-minded people and experiences art in such a greater form,” says Camryn.

A full list of winners from the Grande Prairie area is listed below.