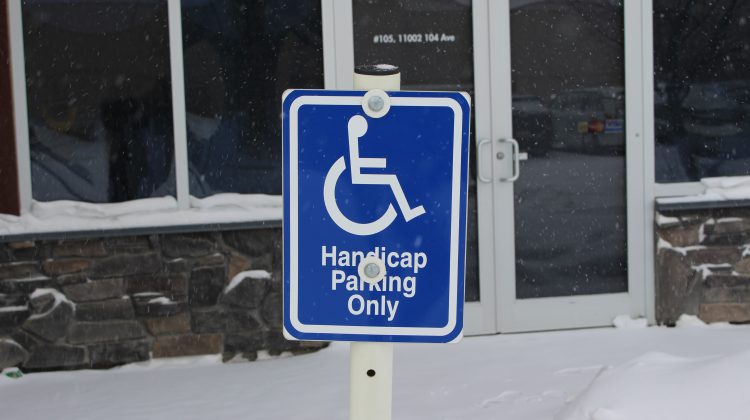 A parking sign outside of the 2Day Fm studio, Emma Mason

A Grande Prairie woman wants to help make the city and province more accessible for all people with disabilities. Spinal Cord Injury Alberta Regional Program Coordinator Mieke de Groot has been working with locals and accessibility groups to help create a federal bill for a barrier-free Canada.

“By creating accessible legislation that’s countrywide, we will have standards to go by that will allow us to enforce the standards and that will encourage people to normalize barrier-free design.”

Creating a barrier-free design would mean adding things like ramps and lifts to buildings people with disabilities may need to access. Alberta is one of five provinces in Canada that already has this type of legislation in place but de Groot says people in the city are still concerned about what’s considered accessible.

“What is it that standardizes getting into the bathroom? Is it truly a barrier-free washroom if you have the door opening the correct way but you don’t have a handle to grab onto it, or if you have a washroom that has the grab bars in place but it’s a low toilet seat… Is that standard, is that what we really want?”

She goes on to say that most of the buildings in the city that are accessible, like American hotel chains and restaurants like McDonald’s, have their guidelines based on American standards instead of Canadian. This new bill would take the reigns back and have places in Grande Prairie follow one set of rules set out straight across the country.

“It will be covering the need to have standardized, normal barrier-free guidelines for the entire nation of Canada. It will include a method of assessing the plans for future buildings and a means of enforcing that accessibility guideline.”

The bill is currently being reviewed by the Senate and then it will return to the Legislature for third reading. If it passes, de Groot is hoping it will go into law by the summer.