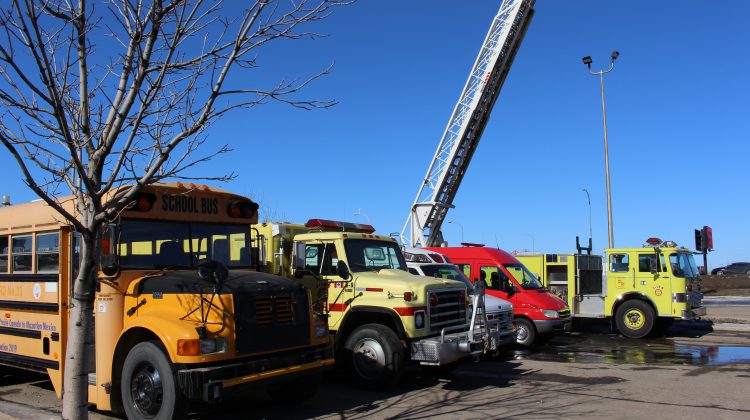 Some of the vehicles making the tip to Mexico, Emma Mason

Twenty Grande Prairie Rotarians are about to make the seven-day drive to Mexico. As part of this year’s Highway to Mexico trip, two firetrucks, a van, three buses and four ambulances full of fire fighting gear as well as soccer gear will be taken to Mazatlan, Mexico.

This will be the 18th year the group has travelled there bringing the total number of vehicles donated to 106. Coordinator Felix Seiler says the convoy was originally started by a local man that used to vacation there.

“He realized that there was a need for wheelchairs so when he came back here they had wheelchairs but didn’t have a way to bring them down there. That’s when they bought a school bus and put the wheelchairs in there and that’s how the project started.”

Highway to Mexico is a joint project between the Swan City Rotary and Grande Prairie Rotary Club along with clubs in Edmonton, Edson, Fairview and Peace River. Seiler says they continue to do this every year because it feels good to see the equipment being used.

“If you go to Mazatlan on vacation every half hour you see a vehicle go by that has the Grande Prairie name on the side. For me I always see what happens, it’s not like I send 20 bucks to some organization and never know what’s going to happen with it… It’s nice to see the stuff being used and its really the instant gratification that we get.”

Some of the vehicles in this year’s group were donated by the City of Lethbridge, Village of Pigeon Lake and Alberta Health Services. The school buses came from the Peace River School Division and Peace Wapiti School Division and were picked up at auctions or bought.

Rotarian Dawn Veilleux-Miller is one of 20 drivers who will be making the more than 5,500-kilometre trip down. This is her second year taking part and says the people receiving this equipment are so grateful.

“To go down there and see the impact it makes on the groups that are getting the vehicles is really, really heartwarming. They’re so appreciative and they’ll feed you and they have bands and they give you presents. They’re so, so grateful for us bringing these down there so it’s quite the experience.”

The Rotarians will spend seven days on the road and another seven days delivering the items. The convoy leaves on March 29th.

Part of Highway 666 closed due to flooding