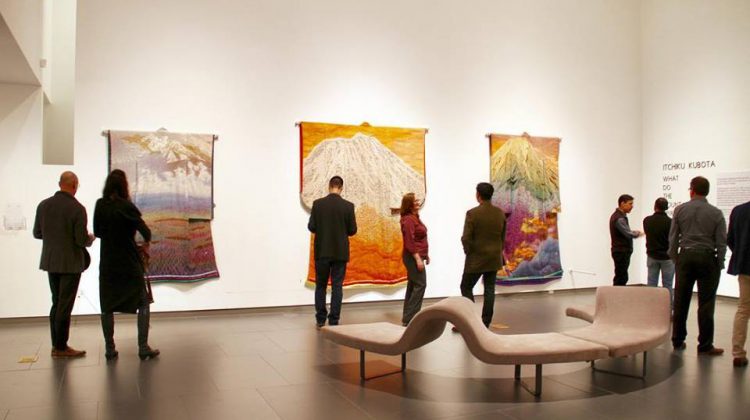 Itchiku Kubota’s “What do the Mountain Spirits Ponder?” on display at the Art Gallery of Grande Prairie, Facebook

There are only a couple days left to take in one of the most renowned exhibits to ever visit the Art Gallery of Grande Prairie. Titled “What do the Mountain Spirits Ponder?”, the exhibition is a collection of delicate kimonos created by Japanese artist Itchiku Kubota.

It opened at the local gallery on November 22nd and will run through Wednesday, February 20th. Executive Director Jeff Erbach says attendance has already set records, reaching audiences from as far away as Yellowknife, Vancouver, and Saskatchewan.

“Unprecedented for, I think, a wide territory of cultural activity in Grande Prairie. I think we see that with some of the big music festivals… certainly for an art exhibition that’s a new thing.”

Erbach also stresses that thousands have people have made it out to see the collection in the middle of the winter. So far, more than 6,000 have been through, and it is possible numbers may reach more than 7,000.

January saw the gallery’s highest ever monthly showing. It’s also believed that another record may have been set by sales of the exhibit’s catalogue.

“We discovered that because we sold so many of the Kubota catalogues that we probably have the number one selling book in Grande Prairie over the past few months as well,” Erbach muses.

Grande Prairie is the first Canadian city in more than 20 years to play host to the international exhibit and the first ever in western Canada. Erbach says the gallery has seen some guests return several times, as the kimonos can be viewed in many different ways.

“There’s just so many really interesting and deep touchpoints to the show that people just consider it super special… I think everyone who has come through has been really moved by it in different ways and considers it spectacular for all our community.”

Kubota created the kimono using an ancient fabric dying technique called tsujigahana that was used in the 1600s. Because of their delicate nature, Erbach says the gallery had to make some adjustments to its security to meet the demand of extra visitors.

“People are desperate to touch the pieces because the surface texture is so incredible, so there’s a lot of impulse control that has to happen. These are Japanese masterpieces; the gallery’s the ultimate ‘you break it, you buy it’.”

It’s also hoped that having an exhibition of this level will encourage more people to visit the art gallery, which is free to the public.