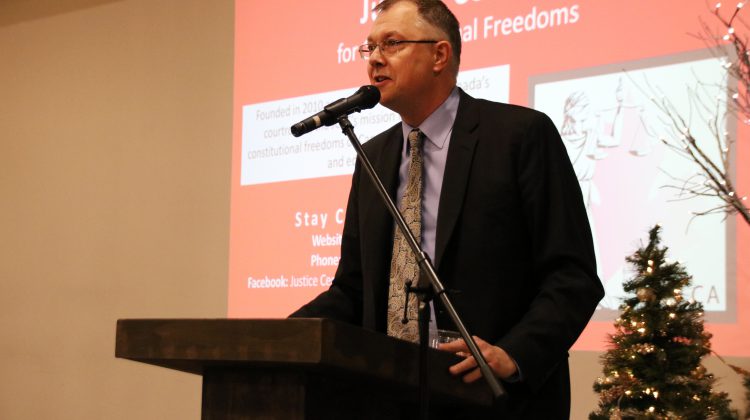 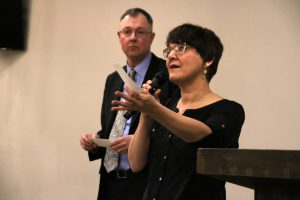 Trimble took the crowd of around 125 people through changes that came with the introduction of Bill 10, which mandates gay-straight alliances in any school where students want them, and Bill 24, which adds that parents can’t be notified about their children’s participation in the clubs unless the student consents.

“The bottom line is, fundamentally, secrecy,” she says. “It’s this really deep concern that parents are going to be left unaware of the needs of their children, and if you don’t know what’s going on, there’s nothing you can do about it.”

In particular, Trimble referenced children only being taught that gender is a spectrum, no mention of the ways people of different faiths can be allies to LGBTQ+ people, and outside organizations distributing material to students. She maintains Parents for Choice in Education isn’t against gay-straight alliances but argues the ability for parents to choose the kind of education their children get has been taken away.

“None of us have an issue with ensuring that students are in a safe and caring, loving environment where they cannot and will not be bullied and where they are supported by their peers,” Trimble told the crowd, “but many of us have an issue when we see that the very legislation that was sold as that, is now being used to enforce one particular perspective of gender.”

Carpay is the lawyer heading up the lawsuit challenging Bill 24. He urges people worried that they’re being cut out of their children’s education to speak out, particularly when it comes to voting for elected representatives.

“If you love your kids, if you care about a free society, grow a spine, stand up to it, because you’re not going to be useful for the cause of freedom if you allow yourself to be intimidated by name-calling.”

In December 2018, an appeal was filed to ask the court to stay provisions of Bill 24, arguing they violate charter rights. That followed the striking down of a request for an injunction in June. Carpay says if Bill 10 and 24 aren’t eventually repealed, he’d still like to see changes made.

“They could at least repeal the secrecy provisions and change the law to protect the mission and the vision and the unique identity of every school by saying that the GSA cannot be used as a vehicle to undermine the school’s beliefs and mission and purpose.”

Peace Parents was formed by a group of parents in the Peace Wapiti School Division who felt their concerns about its gender identity policy weren’t taken into consideration as it was being developed. They meet monthly and have a mission statement of being “committed to advocating for excellence in education while retaining school choice and parental authority.” 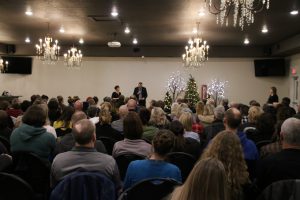 The room at the Bear Creek Golf Club was nearly full to hear from John Carpay and Donna Trimble, Erica Fisher

The group paid for the event space and speakers, but enough donations were collected Monday night to cover the cost. Chair Margaret Senft says they wanted to make more people aware of the changes brought in by both Bills 10 and 24.

“I think the law implies, naturally, that school staff and faculty are safer for the children than their parents, and while that happens in some cases, that is not the general rule. I don’t think that it’s a good idea to make policy on the exception.”

While the audience nearly filled all of the seats in the venue, it was a fairly quiet one. However, the crowd laughed at several points when different gender identities and pronouns were mentioned. Grande Prairie Pride Society President JC Rees was in attendance and says it was disheartening to feel transgender people were being joked about.

“It shows that the battle is not over. A lot of people say they care about freedom of expression, yet when an opinion comes towards them, saying transgender people want acceptance, the GSAs want to exist, then they shoot that down immediately.”

Rees also warns against the desire for schools to tell parents if their children are in a gay-straight alliance, saying it may scare them away from coming out comfortably. Carpay says the Justice Centre has no idea when it will get a decision on its appeal.

Disclosure: Author Erica Fisher is a board member of the Grande Prairie Pride Society.

Log in
to use Ginger
Limited mode
schools tell parents