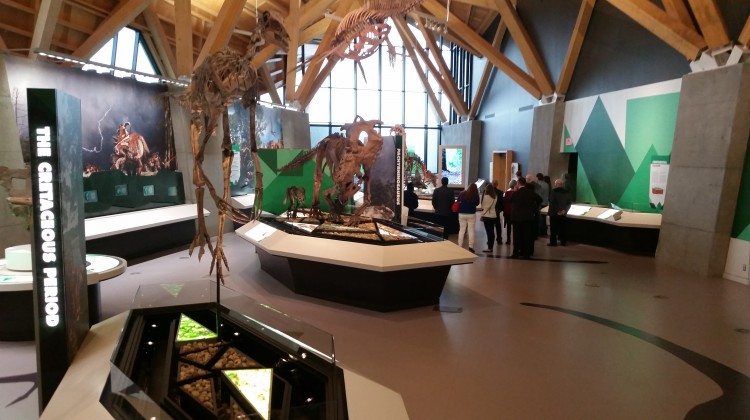 The County of Grande Prairie has given the Philip J. Currie Dinosaur Museum an advance to get it through the end of the year. River of Death and Discovery Dinosaur Museum Society Board Chair Linda Side says the $150,000 is largely to cover costs from taking over operations of the Dine-O-Saur restaurant.

“And not really having a handle on costs that were involved there and management of it and unfortunately, running up to the finish line, we weren’t able to break even.”

The dinosaur museum just entered its fourth year open to the public in Wembley. While it has had its successes, it has also struggled financially since before it opened its doors. It has had to ask for extra money from the County in the past, and it has made efforts to cut costs and find new sources of revenue.

“The sad business is that there are very few museums that are for-profit and the attendance does not cover the nut,” admits Side. “We get no funding from the province or the feds, so I think to be able to break even is a win in itself.”

Plans are in the works to get out of the red. Those include working with other tourism partners, renting out space more often, finding more corporate sponsorship, and creating an experience for people to visit bone beds along Pipestone Creek and the Wapiti River.

“What we want is when people come that they stay for a few days in the region and this is potentially the anchor of tourism.”

“It would be a real shame if it was relegated to a roadside attraction,” Side adds. “It’s just too much of an investment and it’s too much of the story that we have to tell here.”

Extra support is coming from the Town of Wembley. Mayor Chris Turnmire says it has pledged $5,000 a year for the next three years.

“We see students, residents and visitors from near and far enjoying it so much. The venue has added greatly to the region. It is a gem in our midst and the town is delighted to make this ongoing commitment. We look forward to exploring other opportunities to work with the dinosaur museum.”

A change in leadership is also in the works. Former executive director Susan Hunter recently left the museum and Side says it’s hoped a replacement will be in the building by next spring. She notes the position has continually changed over its three predecessors.

“Now we’re about community engagement and raising funds and building the next generation of Philip J. Currie.”

The board has formed a committee for recruitment. It will also be meeting in early 2019 to set its focus for the next year.