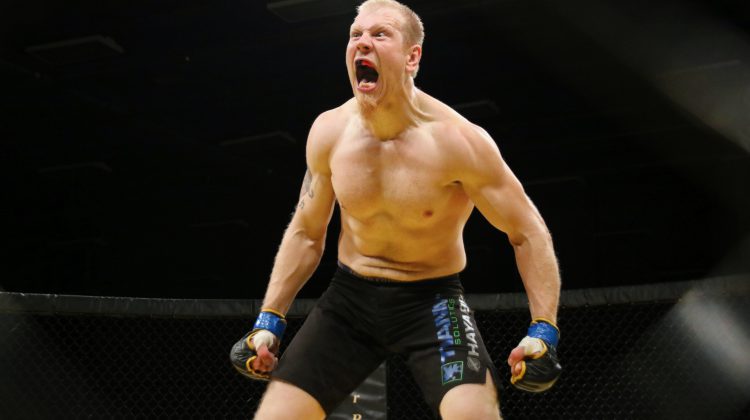 Saturday night marked successful comebacks for a pair of local MMA fighters. They were on the card of the 19th Xcessive Force Fighting Championship event at the ENTREC Centre.

For William Carriere, his return to the octagon was more than two years coming. He had been called out by fellow Grande Prairie fighter Kyle Francotti, who later backed out of their scheduled bout.

“I had a really bad knee injury and I wasn’t able to train or fight for almost two years. I got my knee surgery in February, crutched myself to the gym after two days, started training.”

Not wanting that training to go to waste, Carriere accepted a replacement fight against Brad Robinson of Ontario, which he won by TKO at 1:07 of the second round. He says he plans to stay in the sport after a bit of recovery time.

“I spent the past while with my coach John Stanley for the past four or five months training really really hard for this,” he explains. “I spent a lot of time away from my family and friends, so I might take a month or two off, but I’ll be back for sure.”

Going into Saturday’s event, XFFC veteran Randy Mahon was coming off of two straight losses in the lightweight division at 155 pounds. Previously he had been heavier, largely fighting as a welterweight at 170 pounds.

Mahon won his bout against Calgary’s Marc Savoie as a 145 pound lightweight via ankle lock at 2:42 of the first round. He says he’s happy to be successful in a new weight class.

“In this game you don’t really get a chance to start over, but I’ve never ventured this low before so in a way I kind of get to start all over. Even though I moved my record to .500 tonight, I’m 1-0 at 145 now, so I feel great.”

The weight change came over the spring, partly from switching to a mainly vegetarian/vegan-style diet. He says the process was “life-changing” and he plans to continue to fight in the lightweight division or get down to 135 pounds to be a featherweight.

“I did have some previous injuries that I’ll have to get taken care of after this; see what the doctors say and then move on from there. Hopefully, I’ll be back on that 20th card; I’d like to since I was on the first one.”

The other successful local of the night was Grey Patino, who won a split decision against Peter Janssen of Calgary. GP’s Isaiah Metituk fell to Albaraa Atmeh in the third round of the amateur featherweight title fight, Luis Martinez lost a decision to Daryl St. Rose, and William Quintal was submitted by a triangle choke to Jordan Roberts in the first round.