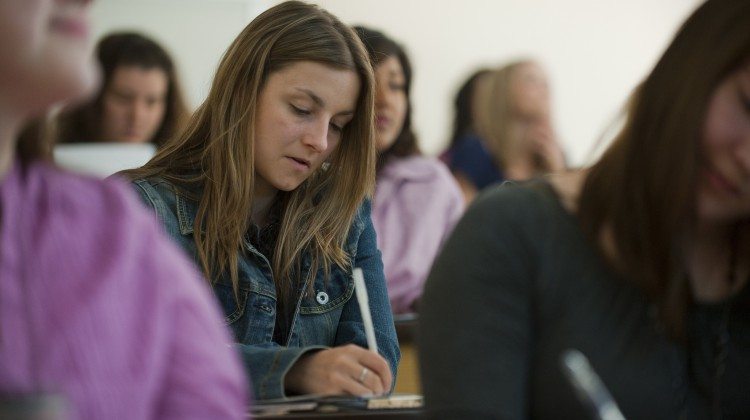 There’s still room for improvement when it comes to class sizes in Grande Prairie. Grande Prairie Public School District Superintendent Sandy McDonald says the average for the school division last year was higher than the provincial average, when typically they’re right around it.

“We’ve opened three schools in the last two years,” he explains, pointing to Isabel Campbell and Roy Bickell. “There’s additional expenses that come with the opening of those schools that require money that we otherwise might spend on staffing.”

McDonald also attributes the higher numbers to running deficit budgets for two years in a row due to declining enrolment. More students were registered this year as Grande Prairie’s economy improved, and the district has hired extra teachers, mostly in the Kindergarten to Grade 3 classes.

“Our trends really show our enrolment growth returning to the way it was a few years ago,” McDonald says. “The budget deficit is essentially eliminated.”

Earlier this month, the Alberta government released a database of class size data from 2004 to 2017 online. The move was in response to a scathing report from Alberta’s auditor general that criticized the province for not properly tracking its class-size reduction plan.

The data showed some public school classes with numbers well above the province’s guidelines of 17 students for K to 3 classes, 23 students for grades 4 to 6, 25 for junior high, and 27 for high school. In some cases, the numbers for some physical education classes were up in the 60s and 70s.

McDonald says those are likely combined classes with two or three teachers assigned. Music classes can also be higher, as well as high school academic classes. He adds that the problem isn’t school-specific.

“It’s more which grade levels in which parts of town are hardest to schedule effectively… In some schools, you might have 50 grade ones or 50 grade twos and you have to get creative; they don’t naturally flow into nice round numbers of sections.”

Like with other school ranking systems, McDonald warns that numbers only tell one part of the story. Anyone with questions is encouraged to talk to the principal of their child’s school.

Grande Prairie and District Catholic Schools seemed to have a better handle on class sizes for the 2017-2018 school year. The average class sizes across grades 4 to 12 were below the provincial guidelines while the numbers for K to 3 classes were above at 20.4 students for every teacher.

“We have fairly reasonable sizes,” says Superintendent Karl Germann. “For 2018-2019 we are planning to hire 18 to 20 more teachers with one time money to improve sizes overall. With multiple years of zero per cent increase in funding the Ministry [of Education] will have to add additional dollars to help everyone out.”

All of the classes over that were from K to 3, with the exception of K to 6 classes in Harry Balfour. Communications Officer Angela Sears says that should be fixed with the opening of Whispering Ridge Community School.